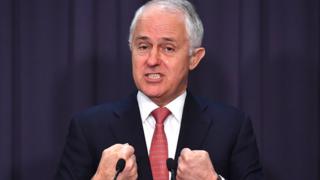 It comes amid a dual citizenship saga, which has led to six politicians losing their office.

In Australia, dual citizens are not allowed to run for federal office.

Malcolm Turnbull unveiled the new disclosure rules on Monday in a bid to clear up the uncertainty around politicians' eligibility in Canberra.

The plan will need to be voted on in both the upper and lower houses in Australia's parliament, before coming into force.

If the politicians had citizenship of another country they will also be required to detail when and how they renounced it.

"What we have seen is a concern, a legitimate concern that there is insufficient transparency," Mr Turnbull said on Monday.

"Members and senators have been put squarely on notice now and so they will be turning their mind to their own affairs and the issues of citizenship."

The plan comes following weeks of pressure on the Turnbull government to carry out an audit of all sitting federal politicians.

Many of the politicians had argued that they had not been aware they were dual nationals due to their parents or place of birth.