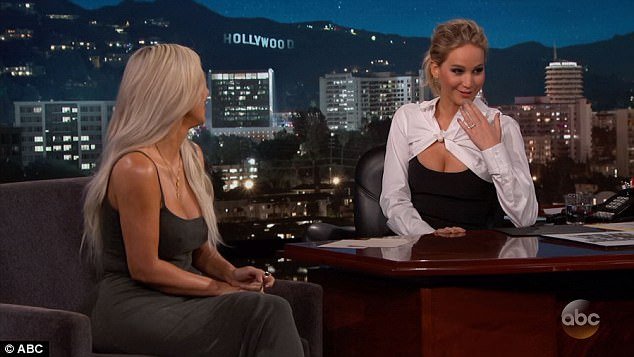 We’re all aware that Jennifer Lawrence is a secret fan of the Kardashian. Earlier this week on Thursday, the 27-year-old Oscar-winning actress was lucky enough to interview her favorite celebrity while filling in on for Jimmy Kimmel on The Jimmy Kimmel Live show followed by Shaquille O’Neal, Dave Groh, and Channing Tatum.

Lawrence was so excited to host the show that she didn’t step back from hilariously joked about not receiving an equal pay as compared to the guest’s hosts on the show. Although she made sure she saved her best for the woman she is most obsessed with.

It doesn’t get better than this! So much fun with Jennifer Lawrence! Tune into @JimmyKimmelLive tonight! pic.twitter.com/k4OszyIlzU

Jennifer was well prepared and had all the right to ask questions to Kim. She didn’t even hold back from firing away personal questions at Kim, starting from the Black Chyna controversy and why she is so mean to her younger sister Khloe.

Black Chyna is the ex-fiance of Rob Kardashian and the mother of his daughter, Dream. Earlier this year, she filed a lawsuit against the family blaming them for the failure of the reality show Rob and Chyna.

“So what do you think about Black Chyna?” Jennifer asked Kim intimately.

Kim very professionally took the easy road and responded, “I always thought to myself if someone was going to ask me about this, Dream would watch it someday and so I think it has to be super respectful to not say anything mean about her mom.”

“I’ve never seen my mom more drunk in our lives.” “It was really funny,” Kim recalled. Jennifer also talked about getting naked in Kris Jenner’s closet and asking Kim to style her fashionably. The interview didn’t just end here, Lawrence further asked Kim, “Are you really mean to Khloe?”

Kardashian seemed off guard with the question but subtly answered by saying, “Khloe and I are patching things up now.” She also added, that if she and her family were stranded on an Island, she would definitely kill Khloe last. Lawrence also asked the reality TV star if they were considering Khloe to be the surrogate for Kanye West’s child.

As Jennifer being really fascinated by the presence of her favorite reality star, also probed further by asking, which of the Kardashian was the first to lose their virginity?

Kim chuckled awkwardly, and said, “Probably me. But I was in a serious relationship. It wasn’t Kourtney.” 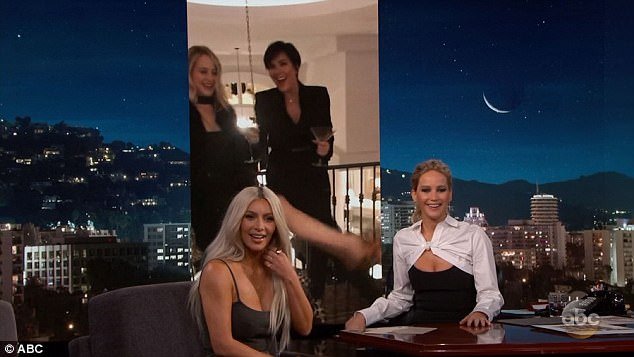 Lawrence started off the interview by mentioning how Kim’s ex-boyfriend Reggie Bush’s wife looks just exactly like her. As the interview continued Jennifer mentioned how lucky she was to enjoy her fan-girl moment.

They later discussed, the future possibility of Kim and Kanye’s marriage.

“Kanye and I watch family feud every night to fall asleep together, and that he can fall asleep literally anywhere”, Kim revealed.

Liked This? Here’s More For You To Read: Pregnant Mom ‘s Womb Exploded With Baby Inside While She Thought She Has ‘Bad Heartburn’ For 10 Days

IcetruckNovember 6, 2017
Like story:
tweet
13 Ways to Keep Your Sneakers As White As You Got Them
You Have to See The Tricks Of This Magician and How They’re Done