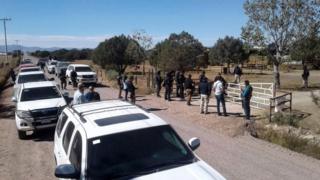 Police in Mexico have arrested a suspected US sect leader in the northern state of Chihuahua.

Police raided three houses and two ranches belonging to Orson William Black Jr, 56, who is wanted on charges of child abuse in the US.

Prosecutors say he is also a suspect in the killing of three US citizens in the area in September.

Twenty-six other people living on the properties were also detained.

It is not clear if they were relatives or followers of Mr Black, or if they had been taken to the property against their will.

The ranches are located in a colony set up by a Mennonite Christian group in 1922.

After fleeing the United States in 2003, Orson William Black Jr settled in the colony, where he is believed to have set up his own polygamous sect, set apart from the Mennonite group living there.

Mr Black had previously been a member of the Fundamentalist Church of Jesus Christ of Latter-Day Saints (FLDS), whose former leader, Warren Jeffs, is serving life in prison for sexually assaulting two underage followers he took as brides.

The child abuse charges against Mr Black were brought in the state of Arizona in 2003 after two teenage girls he took as his "brides" became pregnant.

Shortly after the charges were brought, a US reporter traced Mr Black to the Mennonite colony in Chihuahua.

He is believed to have been living there ever since with his four "wives", his children and a number of fellow US citizens.

The raid on his properties was carried out by Mexican security forces with the help of the FBI.

Mexico's prosecutors' office said that so far, Mr Black had been charged with entering Mexico illegally and with animal cruelty after dozens of butchered animals, including a lion and zebras, were found on his ranches.

It is not clear where the animals came from or what their intended use was.

The prosecutor's office said the 26 people detained on Mr Black's properties would be extradited to the US as they had entered the country illegally.

IcetruckNovember 6, 2017
Like story:
tweet
Why George Clooney hasn’t taken a leading role in over a year
Ben Affleck responds to sexual harassment in Hollywood