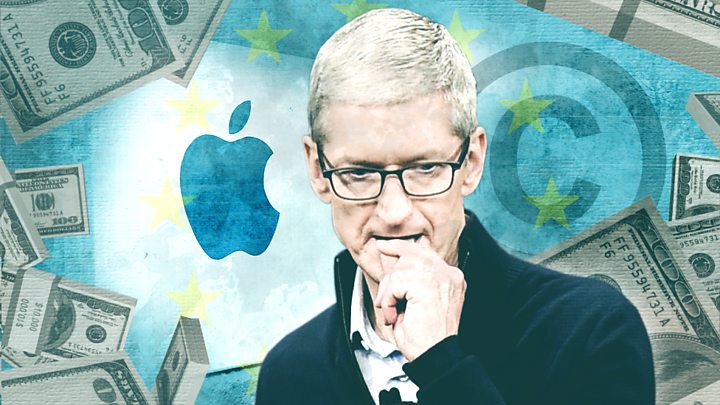 The world's most profitable firm has a secretive new structure that would enable it to continue avoiding billions in taxes, the Paradise Papers show.

They reveal how Apple sidestepped a 2013 crackdown on its controversial Irish tax practices by actively shopping around for a tax haven.

It then moved the firm holding most of its untaxed offshore cash, now $252bn, to the Channel Island of Jersey.

Apple said the new structure had not lowered its taxes.

It said it remained the world's largest taxpayer, paying about $35bn (£26bn) in corporation tax over the past three years, that it had followed the law and its changes "did not reduce our tax payments in any country".

In a further statement the company stressed that no operations or investments had been moved from Ireland.

The Paradise Papers is the name for a huge leak of financial documents that is throwing light on the world of offshore finance.

Up until 2014, the tech company had been exploiting a loophole in tax laws in the US and the Republic of Ireland known as the "double Irish".

This allowed Apple to funnel all its sales outside of the Americas – currently about 55% of its revenue – through Irish subsidiaries that were effectively stateless for taxation purposes, and so incurred hardly any tax.

Instead of paying Irish corporation tax of 12.5%, or the US rate of 35%, Apple's avoidance structure helped it reduce its tax rate on profits outside of the US to the extent that its foreign tax payments rarely amounted to more than 5% of its foreign profits, and in some years dipped below 2%.

The European Commission calculated the rate of tax for one of Apple's Irish companies for one year had been just 0.005%.

Apple came under pressure in 2013 in the US Senate, when CEO Tim Cook was forced to defend its tax system.

Angry that the US was missing out on a huge amount of tax, then-Senator Carl Levin told him: "You shifted that golden goose to Ireland. You shifted it to three companies that do not pay taxes in Ireland. These are the crown jewels of Apple Inc. Folks, it's not right."

Mr Cook responded defiantly: "We pay all the taxes we owe, every single dollar. We do not depend on tax gimmicks… We do not stash money on some Caribbean island."

After the EU announced in 2013 that it was investigating Apple's Irish arrangement, the Irish government decided that firms incorporated there could no longer be stateless for tax purposes.

In order to keep its tax rates low, Apple needed to find an offshore financial centre that would serve as the tax residency for its Irish subsidiaries.

In March 2014, Apple's legal advisers sent a questionnaire to Appleby, a leading offshore finance law firm and source of much of the Paradise Papers leak.

It asked what benefits different offshore jurisdictions – the British Virgin Islands, Bermuda, the Cayman Islands, Mauritius, the Isle of Man, Jersey and Guernsey – could offer Apple.

The document asked key questions such as was it possible to "obtain an official assurance of tax exemption" and could it be confirmed that an Irish company might "conduct management activities… without being subject to taxation in your jurisdiction".

They also asked whether a change of government was likely, what information would be visible to the public and how easy it would be to exit the jurisdiction.

One email sent between senior partners at Appleby says: "For those of you who are not aware, Apple [officials] are extremely sensitive concerning publicity. They also expect the work that is being done for them only to be discussed amongst personnel who need to know."

Apple chose Jersey, a UK Crown dependency that makes its own tax laws and which has a 0% corporate tax rate for foreign companies.

This would have enabled Apple to continue avoiding billions in tax around the world.

Apple's 2017 accounts showed they made $44.7bn outside the US and paid just $1.65bn in taxes to foreign governments, a rate of around 3.7%. That is less than a sixth of the average rate of corporation tax in the world.

Apple and Ireland vs the EU

In August 2016, after a three-year investigation, the European Commission finds that Ireland gave an illegal tax benefit to Apple.

Ireland and Apple launch an appeal.

Apple's Tim Cook calls the EC ruling "total political crap", with "no reason for it in fact or in law". Ireland says the EU is encroaching on sovereign taxation. It fears multinationals will go elsewhere.

Ireland agrees to collect the €13bn, to be held in a managed escrow account pending the appeal verdict.

In October 2017, the EU says it will take Ireland to court as it has not yet collected the money. Ireland says it is complicated and it needs time.

When the "double-Irish" loophole was shut down, Ireland also created new tax regulations that companies like Apple could take advantage of.

One of the companies that Apple moved to Jersey, ASI, had rights to some of Apple Inc's hugely valuable intellectual property.

If ASI sold the intellectual property back to an Irish company, the Irish company would be able to offset the enormous cost against any future profits. And since the IP holder, ASI, was registered in Jersey, the profits of the sale would not be taxed.

It appears Apple has done just that. There was an extraordinary 26% spike in Ireland's GDP in 2015 which media reports put down to intellectual property assets moving into Ireland. Intangible assets rose a massive €250bn in Ireland that year.

Ireland's department of finance denied that the new regulations had been brought in to benefit multinationals.

It said Ireland was "not unique in allowing companies to claim capital allowances on intangible assets" and had followed "the international norm".

Apple declined to answer questions about its two subsidiaries moving their tax residency to Jersey.

It also declined to comment when asked whether one of those companies had helped create a huge tax write-off by selling intellectual property.

Apple said: "When Ireland changed its tax laws in 2015, we complied by changing the residency of our Irish subsidiaries and we informed Ireland, the European Commission and the United States.

"The changes we made did not reduce our tax payments in any country. In fact, our payments to Ireland increased significantly and over the last three years we've paid $1.5bn in tax there."