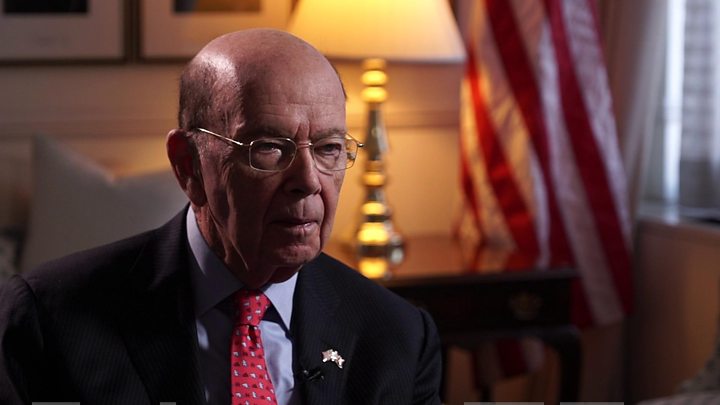 Donald Trump's commerce secretary says there is "nothing improper" about his business links to Russian figures who are currently under US sanctions.

Wilbur Ross was accused of misleading senators after leaked documents showed his interests in a firm in which some shareholders have ties to the Kremlin.

He told the BBC that the US had not sanctioned the company, Sibur, so "there's nothing wrong with that".

Mr Ross also denied he had failed to disclose the information.

They come as part of a huge leak of financial documents, dubbed the Paradise Papers, revealing how the powerful and ultra-wealthy, including the Queen's private estate, secretly invest vast amounts of cash in offshore tax havens.

What did Wilbur Ross do, according to the leaks?

The leaks show he has investments in shipping firm Navigator Holdings, which earns millions a year transporting oil and gas for Sibur. Two major Sibur shareholders have been sanctioned by the US:

Another key Sibur shareholder is President Vladimir Putin's son-in-law, Kirill Shamalov, who holds a 3.9% stake in the firm. While he is not subject to sanctions, his father, Nikolai, is.

Mr Ross has not disputed the revelations, telling the BBC: "There's nothing whatsoever improper about Navigator having a relationship with Sibur."

"If our government decided to sanction them, that would be a different story," he continued.

He said he had disclosed the business links to the office of government ethics, and denied misleading the confirmation hearing committee when he took office.

He said he had never met any of the figures concerned.

The US imposed some sanctions after Russia annexed Crimea in 2014. Others were imposed last year for alleged interference in the US presidential election.

The commerce department earlier said Mr Ross had "been generally supportive of the administration's sanctions of Russian and other entities".

What's the problem then?

Prior to being confirmed in office as commerce secretary, Wilbur Ross did not reveal to Congress the full details of his company holdings.

According to the leaks, he retains a financial interest in Navigator Holdings via a number of companies in the Cayman Islands, some of which he did disclose at the time of his confirmation.

However, under the disclosure rules he did not have to declare his interest in Navigator Holdings.

But questions will be raised about Mr Ross's potential conflicts of interest and whether his ties undermine US sanctions against Russia.

"Our committee was misled, the American people were misled by the concealment of those companies," Democratic Senator Richard Blumenthal told NBC News after the revelations came to light.

Mr Blumenthal has called for an investigation into the treasury secretary's links to President Putin's son-in-law.

Mr Trump's presidency has been dogged by allegations that Russians colluded to try to influence the outcome of the election. He has called the allegations "fake news".

How close is Ross to Trump?

They have known each other for more than a quarter of a century. Mr Ross played a key part in a pre-packaged bankruptcy deal – an agreement between a company and its creditors – for Mr Trump's Atlantic City casino, the Taj Mahal, in the 1990s.

He stepped in to represent the angry bondholders but liked Donald Trump's style.

Mr Ross, according to Trump biographer David Cay Johnston, was the key negotiator preventing Donald Trump from "being swept into the dustbin of history because he saw the value in the Trump name".

"If it hadn't been for Wilbur Ross, Donald Trump would not be in the White House."

How close is Ross to Navigator Holdings?

WL Ross & Co, which was founded by Wilbur Ross, appears to have maintained a close relationship with the shipping company.

On the night that he was nominated as commerce secretary, Mr Ross was congratulated on his promotion by the senior management of Navigator Holdings at a New York restaurant, Bloomberg reports.

Mr Ross reportedly told the CEO of Navigator: "Your interest is aligned to mine. The US economy will grow, and Navigator will be a beneficiary."

Another key Navigator customer has been PDVSA, the Venezuelan state oil company. It was targeted by US sanctions this year.

March – November 2014: He remains a board member as the US sanctions Russia for annexing Crimea

2017: Navigator doubles the fleet it uses on Sibur exports to four

What else do the Paradise Papers reveal?

What are the Paradise papers?

They are a huge batch of leaked documents mostly from offshore law firm Appleby, along with corporate registries in 19 tax jurisdictions, which reveal the financial dealings of politicians, celebrities, corporate giants and business leaders.

The 13.4 million records were passed to German newspaper Süddeutsche Zeitung and then shared with the International Consortium of Investigative Journalists (ICIJ). Panorama has led research for the BBC as part of a global investigation involving nearly 100 other media organisations, including the Guardian, in 67 countries. The BBC does not know the identity of the source.

IcetruckNovember 6, 2017
Like story:
tweet
iPhone users fume over letter ‘i’ bug
Why George Clooney hasn’t taken a leading role in over a year