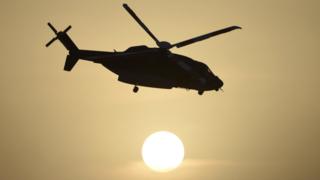 A senior Saudi prince was killed when the helicopter he was travelling in crashed near the border with Yemen, state television reports.

The cause of the crash is unknown.

It comes a day after a major purge of the kingdom's political and business leadership, including several princes.

The detentions, ordered by an anti-corruption body led by the kingdom's Crown Prince Mohammed bin Salman, targeted dozens of people, including 11 princes, four ministers and dozens of ex-ministers.

The unprecedented move is seen as an attempt to cement the power of the heir to the throne.

Prince Mansour bin Muqrin was the son of another former crown prince.

His father, Muqrin bin Abdul Aziz, was pushed aside by his half-brother King Salman a few months after he took the throne in 2015.

The wreckage of the aircraft was found on Monday, the interior ministry says, and a search is under way for any survivors.

The group was carrying out an aerial inspection of the region when it crashed, it adds.