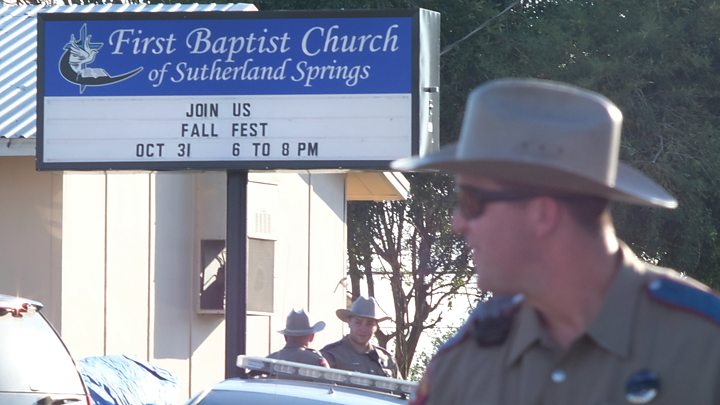 Two men are being hailed as heroes for pursuing the gunman suspected of killing 26 people at a Texas church.

"The shooter… fled in his vehicle, the other gentleman came and said we need to pursue him," he said.

The attack happened at the First Baptist Church in Sutherland Springs, a small town in Wilson County.

At least 26 people, aged from five to 72, were killed and 20 others were wounded when the gunman opened fire during Sunday service.

How was the gunman stopped?

Speaking to local TV station Ksat.com, Mr Langendorff said: "I pulled up to the intersection where the shooting happened.

"I saw two men exchanging gunfire, the other being [a] citizen of the community.

"He came to my vehicle in distress with his weapon. He explained very quickly what happened. He got into the truck and I knew that it was time to go."

He said the pair had driven at speeds of up to 95mph (153km/h) until the gunman lost control of his car and crashed.

"We led police to him," he said. "Everybody else was headed to the church."

The suspected gunman was later found dead of a self-inflicted gunshot wound inside his vehicle which contained several weapons, police said.

No details have emerged about the man who pursued the gunman along with Mr Langendorff.

Mr Langendorff's Facebook page has been inundated with messages of support since the shooting. One post says: "God bless you, Johnnie. You are a true American hero".

This is a small community of around 400 people – there's just one post office here, and only two churches.

The attack at the First Baptist has touched virtually every household here.

Even the local Sheriff, Joe Tackitt, knew people caught up in the attack.

He tells me that for him, seeing children inside the church in the aftermath was what hurt the most.

He estimates between 12 to 14 children were either dead or injured.

The suspect's ex-in-laws were also occasional worshippers at this church, and it's now believed he may himself have had a connection to this place, which could help investigators to determine his motive.

Who are the victims?

Wilson County Sheriff Joe Tackitt told BBC News that he believes five or six victims were from the same family, but US media have reported that up to eight members of one family were killed.

The victims' identities have yet to be officially named, but authorities on Monday confirmed the identity of the gunman.

The suspected attacker's former in-law relatives and ex-wife occasionally worshipped at the church, Sheriff Tackitt said, but were not there at the time of the shooting.

The First Baptist Church's pastor, Frank Pomeroy, told US media that his 14-year-old daughter, Annabelle, was among those killed.

Officials said 23 people were found dead inside the church while two people were fatally shot outside. Another died in hospital, authorities said.

Sutherland Springs, which has a population of about 400, lies about 30 miles (50km) south-east of the city of San Antonio.

The gunman was identified on Monday as Kelley, 26, of New Braunfels, Texas.

Kelley was reportedly charged from the US Air Force in 2014 following a court martial for assaulting his wife and child.

Texas Governor Greg Abbott said on Monday: "It's clear this is a person who had violent tendencies, who had some challenges, and someone who was a powder keg, seeming waiting to go off."

Mr Abbott added that the attacker should not legally have been allowed to own a firearm, after having been denied a gun owner's permit by the state.

The motive for the killings is not yet clear, but the governor said the church did not appear to have been randomly targeted.

"I don't think this church was picked out at random. I think there was a purpose and intent that Devin Kelley had in showing up at this particular location," Governor Abbott told CBS on Monday.

Officials said the attacker, dressed all in black and wearing a bulletproof vest, opened fire with a Ruger assault rifle outside the church at around 11:30 local time (17:30 GMT) before opening fire on the congregation inside.

Meanwhile, President Donald Trump, on a tour of Asia, said guns were not to blame for the shooting.

"We have a lot of mental health problems in our country, but this isn't a guns situation," he said.