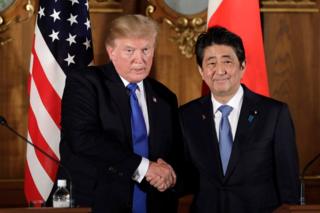 US President Donald Trump has said Japan could shoot North Korean missiles "out of the sky" with military equipment bought from the US.

Japan's PM Shinzo Abe followed up by saying his country could intercept missiles "if necessary", and added that he was looking into the deal.

The two leaders were speaking to reporters at the close of Mr Trump's first state visit to Japan.

On Monday, while answering questions at a press conference, Mr Trump said Mr Abe was "going to purchase massive amounts of military equipment" from the US.

Referencing North Korea's missiles, he said Mr Abe could "shoot them out of the sky" when he completed the purchase, which Mr Trump said would provide jobs to Americans as well as "safety for Japan".

Mr Abe said he was considering such a deal, adding that Japan had to "qualitatively and quantitatively" enhance its defence capability, given the "very tough" North Korea situation.

He stressed that missile defence was based on "legal co-operation" between Japan and the US, and as for shooting down missiles, "if necessary of course we can do that".

It is not clear whether a military deal has been signed during Mr Trump's trip, but the two countries are close military allies with the US maintaining several military bases in Japan.

In September Mr Trump had tweeted that he would allow the sale of high-end military equipment to Japan and South Korea.

I am allowing Japan & South Korea to buy a substantially increased amount of highly sophisticated military equipment from the United States.

Japan does not have a standing army, but instead maintains what it calls self-defence forces, under its post-war pacifist constitution which the hawkish Mr Abe has been seeking to revise.

Earlier on Monday, North Korean state media accused Mr Trump of driving tensions "to the extremes" and said that "no-one can predict when the lunatic old man of the White House, lost to senses, will start a nuclear war" against North Korea.

Mr Trump on Monday met families of Japanese people abducted by North Korea – a topic which he later addressed in the press conference, calling it a "very, very sad thing".

He said it would be "a tremendous signal" and "the start of something very special" if North Korean leader Kim Jong-un returned the abductees, something which Mr Abe has constantly pushed for.

The two leaders also said they discussed economic co-operation in the region.

Mr Trump is visiting Japan as part of his first tour of Asia as US president.

He has also visited a US air base near Tokyo, and met American business leaders where he publicly criticised Japan over a trade deficit.

Mr Trump will be going to South Korea, China, Vietnam and the Philippines in the coming week.