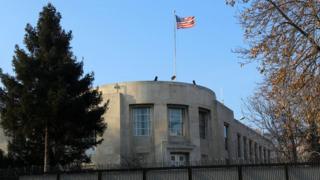 US missions in Turkey have partially resumed processing visa applications, the embassy said on Monday.

Last month, US missions suspended all non-immigrant visa services after Turkey's arrest of a US consulate employee.

Turkey's embassy in Washington has also said it will process visa applications from US citizens on a limited basis.

The US worker was held over suspected links to a cleric blamed for last year's failed coup in Turkey.

Washington condemned the move as baseless and damaging to bilateral relations.

Ankara has for months been pressing Washington to extradite US-based cleric Fethullah Gulen over his alleged role in the botched coup in July 2016.

In the aftermath of the coup attempt, which was led by military officers, 40,000 people were arrested and 120,000 sacked or suspended.