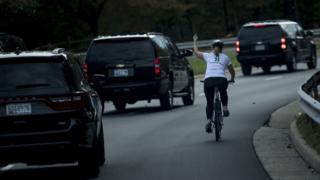 A woman pictured raising her middle finger toward US President Donald Trump's motorcade has reportedly been fired from her job over the photograph.

The image went viral after it was taken on 28 October in Virginia, close to a Trump golf resort.

Juli Briskman, who was identified as the cyclist in the image, alleges she was fired by employers Akima LLC after she posted it to her online profiles.

The company did not respond to the BBC's request for comment.

Ms Briskman told US media the firm had called her into a meeting a day after she informed their HR department she was the subject of the widely circulated image.

She told the Huffington Post news website that executives had told her they classified the image as "lewd" or "obscene", and therefore deemed that it violated their social media policies after she had posted it to her Twitter and Facebook accounts.

However Ms Briskman said she had emphasised to management that she had not been in working hours when the photograph was taken and had not mentioned her employers on the social media pages.

Ms Briskman also alleges that a male colleague was allowed to keep his job after deleting a post deemed as offensive in a separate incident.

She therefore questions why she was immediately dismissed from her role.

The 50-year-old mother-of-two had reportedly been at the government contractor firm for six months working in communications.

Despite losing her job, Ms Briskman said she did not regret making the gesture.

"In some ways, I'm doing better than ever," she told The Huffington Post

"I'm angry about where our country is right now. I am appalled. This was an opportunity for me to say something."

The press photographer, MBrendan Smialowski, told the AFP website that it was common to see people protesting or making obscene gestures at presidents as they drove by.

He said that he had been struck by the "tenacity" of Ms Briskman after she made the gesture several times and made attempts to catch up with the motorcade.

IcetruckNovember 6, 2017
Like story:
tweet
The Latest: Trump says he’ll ‘figure it all out’ in SKorea
Trump strikes hard line against NKorea in Japan