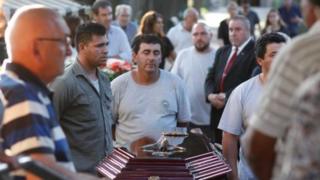 The first funerals of five Argentine tourists killed in last Tuesday's truck attack in New York have taken place in their home town of Rosario.

Relatives and friends have been paying their last respects to the men.

They were part of a group of 10 friends who had travelled to the United States to celebrate the 30th anniversary of their graduation from college.

Eight people in total were killed in the attack, carried out by Uzbek immigrant Sayfullo Saipov.

He drove his truck on to a cycle lane in Lower Manhattan, targeting cyclists and pedestrians.

The other victims were a Belgian citizen and two Americans.

The coffins with the bodies of the five Argentine citizens arrived in Buenos Aires on Monday morning.

They were taken by road to Rosario, some 300km (190 miles) north-west of the capital.

The Jewish businessman who organised and helped sponsor the trip, Ariel Erlij, was buried at private cemetery in the outskirts of the city.

The body of Diego Enrique Angelini was buried in central Rosario.

The funerals of the other three victims – Hernán Diego Mendoza, Alejandro Damián Pagnucco and Hernán Ferrucci – will take place later on Tuesday.

Mayor Mónica Fein said the city of Rosario was devastated by the 31 October attack.

"I came here to salute the family and friends and say that that the whole city feels their pain," she told local newspaper La Capital.

Last week, the 1,300 students of the General San Martín polytechnic college, where the friends graduated in 1987, gathered before class to hold a minute's silence.

Many lit candles outside the college building.

"It's a day of great pain for everyone," said Bibiana Vignaduzzo, their old teacher and current director of the college.

"It's impossible not to remember them as a very united group."

"Argentines worship friendship… and they were here to celebrate the 30th anniversary of graduating from the same school, of shared lives and dreams," said Mr Macri.

"Unfortunately, five families were destroyed in this cowardly attack," he added.