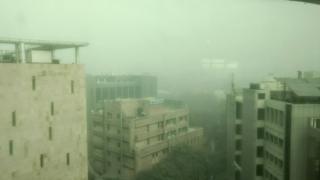 Panic has gripped the Indian capital, Delhi, as residents woke up to a blanket of thick grey smog on Tuesday.

The Indian Medical Association (IMA) declared "a state of medical emergency" and urged the government to "make every possible effort to curb this menace".

People have been posting dramatic pictures on social media showing the extent of the problem.

Can barely see the tallest buildings in the neighbourhood. #DelhiSmog pic.twitter.com/An6WezksyP

View from my balcony at 11:15 am! Delhi NCR has become a hellhole. #smog
(It seems the evil Yindoos celebrated Diwali last night.) pic.twitter.com/RBtxXlHFuX

The levels of tiny particulate matter (known as PM 2.5) that enter deep into the lungs reached as high as 700 micrograms per cubic metre in some areas on Tuesday, data from the System of Air Quality Weather Forecasting and Research website shows.

The IMA has also recommended that the city's half marathon, due to be held on 19 November, should be cancelled.

Most social media users have complained of breathing difficulties.

The air pollution in DELHI is alarming and I hope someone is keen on doing something about it. Lives of little children are at risk and this is not the state of affairs we want them to be growing up in. Time for talk is over. Needs some effective action.

It’s almost impossible to breathe in Delhi today. Pollution is the only story that matters right now. https://t.co/o1jeP8VxbF

When the heart of the capital is facing breathing issues @MURUKESHK pic.twitter.com/gFOiFIwqQ2

The chief minister of Delhi, Arvind Kejriwal, has asked his education minister to consider shutting down schools for a few days.

Delhi sees pollution levels soar in winter due to farmers in neighbouring Punjab and Haryana states burning stubble to clear their fields.

Activists say very little has been done to stop the practice despite Delhi facing severe pollution for a number of years.

The government enacted a plan in October to combat some of these problems.

The plan includes traffic restrictions and the shutdown of a major power plant. Last year car rationing was trialled in an attempt to curb pollution.

But none of the measure seem to have had much impact.

Some Twitter users believe that the problem needs a long-term solution instead of a "piecemeal approach".

Colour of Delhi sky today.The Sun is out but you can barely see anything #delhipollution pic.twitter.com/CIvDNO71te

Welcoming the King & Queen of Belgium, now in #Delhi to commemorate Indians who fought in #Flanders, with an atmospheric recreation of WW1. pic.twitter.com/KUvksfOQdu