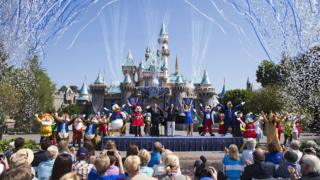 Disney backs down after US media boycott

The Walt Disney company has ended its ban of the Los Angeles Times newspaper after a backlash from US media.

Last week it emerged Disney had stopped inviting the newspaper to press screenings because it disagreed with an article published in September.

The New York Times and Washington Post vowed to boycott Disney screenings in solidarity with the banned newspaper.

The LA Times went public about its ban in a "note to readers" on Friday, saying it could only review Disney's Christmas movies after they had been released publicly because the company "declined to offer The Times advance screenings".

Disney responded with a statement explaining it decision. It alleged the LA-based newspaper had "showed a complete disregard for basic journalistic standards" in a two-part piece it wrote about the company's California park and its relationship with the town of Anaheim, where it is based.

But a backlash against Disney's decision built over the weekend and on Tuesday a band of critics associations voted to disqualify Disney movies from award consideration until the ban was "publicly rescinded".

The New York Times had also issued a statement saying: "A powerful company punishing a news organization for a story they do not like is meant to have a chilling effect.

"This is a dangerous precedent and not at all in the public interest."

But by Tuesday afternoon Disney had confirmed it had changed its mind and revoked the restrictions after "productive discussions with the newly installed leadership at The Los Angeles Times regarding our specific concerns".