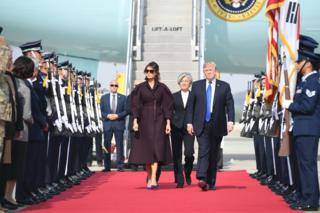 Donald Trump arrives in S Korea with focus on Pyongyang

US President Donald Trump has landed in South Korea, with the North's nuclear ambitions high on his agenda.

He flew in from Tokyo, after saying on Monday that Japan could shoot down Pyongyang's missiles with US equipment.

Trade will also be a key focus for Mr Trump, who wants fresh terms for the US-South Korea free trade agreement.

He is meeting President Moon Jae-in, US troops and local politicians. Mr Trump is currently on a five-nation tour of Asia, his first as president.

Prior to his departure for South Korea, Mr Trump tweeted that "massive military and energy orders" from Japan were happening, and also praised Mr Moon.

Getting ready to leave for South Korea and meetings with President Moon, a fine gentleman. We will figure it all out!

Though the US president will only spend about 24 hours in South Korea, it is perhaps the most symbolic stop in his Asian tour, says the BBC's Robin Brant in Seoul.

The trip is designed to bolster the military alliance that has long protected South Korea, and strength in unity is the message they want to send to North Korean leader Kim Jong-un just across the border, says our correspondent.

But the two leaders also have their differences. Mr Trump has previously accused Mr Moon's government of trying to appease the North.

He has also previously criticised the free trade agreement between the US and South Korea, and has made clear he wants to re-negotiate its terms.

In Seoul, many are hoping that Mr Trump will not repeat his strong rhetoric against North Korea, or make any off-the-cuff remarks about "fire and fury", which many here regard as unnecessary and incendiary, says our correspondent.

Protests against Mr Trump, as well as counter-rallies welcoming him, have been held in Seoul and elsewhere.

Mr Trump will be going to China, Vietnam and the Philippines in the coming week.

IcetruckNovember 7, 2017
Like story:
tweet
WATCH: How to protect your smartphone from fake apps
Man jailed for 27 years for plotting to murder US judge