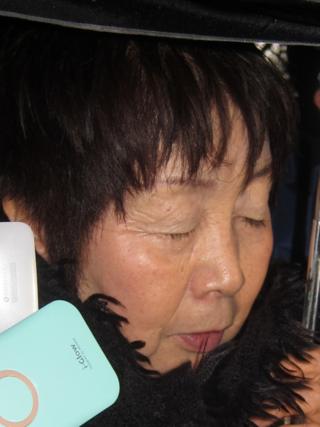 A 70-year-old Japanese woman has been sentenced to death for the murder of three men, one of whom was her husband, and the attempted murder of another.

Chisako Kakehi is accused of using cyanide to kill her lovers and make millions from insurance payouts. Her lawyers plan to appeal the sentence.

Prosecutors said she targeted wealthy men who were mostly elderly or sick.

She became known in Japanese media as the Black Widow, after the female spider which kills its mates after sex.

Kyoto District Court ruled that Chisako Kakehi used cyanide "with a murderous intention" in the four cases, and that she should be held responsible for the crimes even though she had been diagnosed with dementia.

"The cases were well prepared in advance. They were cunning and malicious. I have no choice but to impose the ultimate penalty," Judge Ayako Nakagawa said.

Kakehi, who was wearing a hearing aid and asked the judge to speak loudly during the proceedings, showed no emotion when the sentence was handed down.

Ms Kakehi was accused of murdering her fourth husband, 75-year-old Isao Kakehi, on 28 December 2013, a month after they got married.

She was also accused of killing two other boyfriends, aged between 70 and 80, and the attempted murder and robbery of another boyfriend – who later died of cancer – between 2007 and 2013.

The trial heard that she had joined matchmaking services in which she had specifically requested to meet men who were rich and childless.

She reportedly inherited around one billion yen ($8.8 million) in all, although she later lost some of it through the stock market.

During the 135 day trial Kakehi appeared to admit killing Isao Kakehi, saying he had not treated her well financially, but later retracted it.

Her lawyers said at the time that her testimony could not be trusted because of her dementia. They have appealed against the death sentence to a higher court, arguing that her dementia means she cannot be held criminally liable.

The high profile case saw over 560 people queue to get into the Kyoto courtroom to witness the outcome of the marathon trial.

It is the second-longest court case involving a jury since 2009, when Japan introduced a joint judge-jury system.