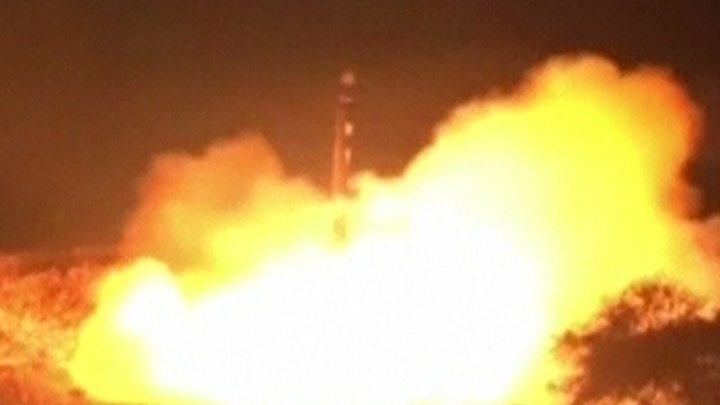 This "may be considered an act of war", state media quoted the prince as telling UK Foreign Secretary Boris Johnson in a telephone conversation.

On Saturday, a ballistic missile was intercepted near the Saudi capital.

Iran denies arming the Houthi movement, which has fought a Saudi-led coalition backing Yemen's government since 2015.

Houthi-aligned media reported that the rebels had fired a Burkan H2 ballistic missile at King Khaled International Airport, which is 850km (530 miles) from the Yemeni border and 11km north-east of Riyadh. Saudi missile defences intercepted the missile in flight, but some fragments fell inside the airport area.

Human Rights Watch said the launch of an indiscriminate missile at a predominantly civilian airport was an apparent war crime.

The official Saudi Press Agency reported on Tuesday that in his telephone call with Prince Mohammed, Mr Johnson had "expressed his condemnation of launching a ballistic missile by Houthi coup militias".

"He dismissed false and dangerous claims made by Saudi officials, and said they are against international law and the UN Charter," Mr Qassemi added.

Iran and Saudi Arabia are engaged in a regional "Cold War"; a battle for influence and power. And just like the US-Soviet Cold War, while the two main protagonists are not directly involved in fighting each other, they or their proxies are engaged on a number of other battlefields.

The Saudis went into Yemen to counter alleged Iranian influence, but the campaign has proved a quagmire for the Saudi forces.

Iran is in the ascendant in Iraq, where it is a close ally of the Shia-dominated government. And it is "winning" in Syria too, helping to stabilise and consolidate the Assad regime. Saudi support for Syrian rebel factions has achieved nothing.

Now the Saudis seem to be focusing on another country where Iran's allies – in this case, Hezbollah – are well entrenched – Lebanon. But tinkering with that country's fragile stability has huge risks – not least the danger of prompting a crisis that could lead to a full-scale war between Israel and Hezbollah.

He said the missile was similar to one launched in July that was shot down close to the Saudi city of Mecca, and that it was manufactured in Iran, disassembled and smuggled into Yemen, then reassembled by "operatives from the Iranian Revolutionary Guards and Hezbollah".

The US permanent representative to the UN, Nikki Haley, said the missile fired in July was an "Iranian Qaim", which she described as a "type of weapon that had not been present in Yemen before the conflict". The missile shot down on Saturday "may also be of Iranian origin", she added.

#KSA bombs #Yemen to smithereens, killing 1000’s of innocents including babies, spreads cholera and famine, but of course blames Iran. 3/

Ms Haley warned that by providing such weapons to the Houthis, the Revolutionary Guards were violating two UN Security Council resolutions.

Iran's foreign ministry has said the missile launch was "an independent action" by the Houthis in response to Saudi-led coalition "aggression".

In response to the attack, the coalition announced the "temporary" closure of all Yemeni land, sea and air ports, tightening an existing blockade, but said humanitarian aid could continue to enter Yemen under strict vetting procedures.

The United Nations said on Tuesday that all humanitarian flights to Yemen had been grounded and called on the coalition to re-open Yemen's borders.

"The situation is catastrophic in Yemen," Jens Laerke, a spokesman for the Office for the Co-ordination for Humanitarian Affairs, told reporters.

The conflict has also left 20.7 million people in need of humanitarian assistance, created the world's largest food security emergency, and led to a cholera outbreak that is believed to have affected 902,000 people and caused 2,191 deaths.

No reported warhead size or range, but in November 2017 Burkan-2 was intercepted over Riyadh's King Khaled International Airport, 850km from border