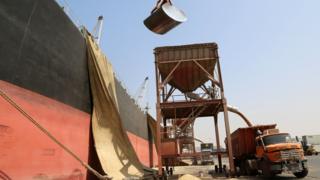 Aid agencies are seeking urgent access for humanitarian supplies to war-torn Yemen, after the Saudi-led coalition closed all routes into the country.

The UN and the Red Cross said a "catastrophic" situation threatened millions who rely on life-saving aid.

Saudi Arabia justified the move saying Houthi rebels were being supplied with weapons from Iran, and has accused Tehran of "direct military aggression".

Iran denies arming the rebels, who have fought the coalition since 2015.

On Saturday, a ballistic missile was intercepted near the Saudi capital.

Saudi Crown Prince Mohammed bin Salman said providing rockets to the rebels "may be considered an act of war".

The US permanent representative to the UN, Nikki Haley, said Saturday's missile and others could be of Iranian origin.

She said Iran was violating two UN resolutions simultaneously and said it should be held accountable.

She appeared to be referring to:

Iran's foreign ministry has insisted that the missile launch was "an independent action" by the Houthis in response to Saudi-led coalition "aggression".

In response to the attack, the coalition announced the "temporary" closure of all Yemeni land, sea and air ports, tightening an existing blockade, but said humanitarian aid could continue to enter Yemen under strict vetting procedures.

However, the BBC's Imogen Foulkes in Geneva says aid agencies have reacted with dismay and anger to the border closures.

The Red Cross said its shipment of chlorine tablets, vital to combating a cholera epidemic which has affected more than 900,000 people, had been blocked.

"If these channels, these lifelines are not kept open it is catastrophic for people who are already in what we have said is the world's worst humanitarian crisis at the moment," said Office for the Co-ordination for Humanitarian Affairs spokesman Jens Laerke.

"So this is an access problem of colossal dimensions right now."

The UN says seven million Yemenis are on the brink of famine.

The country relies on imports for virtually everything civilians need to survive, but now neither food, fuel nor medicine can get in.