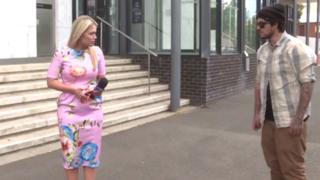 An Australian TV reporter has won praise for her response to a man who verbally abused her on a street as she tried to do her job.

Nine News journalist Maggie Raworth had been preparing to deliver a piece to camera when she was approached by the man in the Victorian city of Ballarat.

Video of the incident shows the man harassing Ms Raworth and her cameraman with insults and profanities.

The reporter posted the footage online, drawing applause for her calm reaction.

In the video, the man tells Ms Raworth and her colleague to "get a real job", describing their profession as the "lowest of the low".

He makes several expletive-laden comments directed at the journalist, including some about her appearance.

Ms Raworth responds by asking calmly, "What's your problem, sir? What have I done to you personally?"

At one point she begins filming the man. She later said she feared for her safety.

"To be honest, I thought he would hit me so I wanted to capture that," Ms Raworth told Nine News.

"I'm a confident person and he definitely chose the wrong target."

Ms Raworth posted the video to Facebook on Monday, where it has been viewed tens of thousands of times. Commenters called the abuse "disgusting" and "disgraceful".

"Good on you! Sticking up for yourself," wrote one person. Another said: "You handled the situation brilliantly."