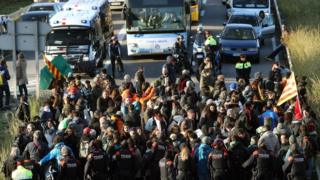 Several major roads and some rail lines in Catalonia have been blocked by pro-independence activists protesting against the detention of the region's deposed leaders.

Separatist trade unions have called for a general strike but it has not been backed by the major unions.

Despite transport delays, shops and businesses appear to be open as normal.

Prime Minister Mariano Rajoy has called for a big turnout in the snap election so that Spain can get over the crisis.

In a speech to parliament, he defended imposing direct rule on Catalonia following its unilateral declaration of independence, and calling an election for 21 December.

On Wednesday, some protesters across the region carried separatist flags and banners reading "Freedom for political prisoners". Minor scuffles were reported when police moved in to remove protesters from some roads.

Universities also joined the strike but the adherence in other areas seemed to be low. Spanish law prohibits strikes for political motives and the unions say they are acting against job insecurity.

Eight politicians are being held in an investigation by Madrid authorities into alleged rebellion and sedition linked to Catalonia's unilateral declaration of independence.

A Belgian investigating judge is yet to decide whether to execute an EU arrest warrant issued by a Spanish judge last week. The sacked leader has been freed on bail and is scheduled to appear in court on 17 November.

Meanwhile, Belgium's Prime Minister, Charles Michel has denied his government is in crisis over Mr Puigdemont's presence, an issue that risks exposing separatist divisions in the country.

He told parliament that the question over Mr Puigdemont was a "matter for the courts, not for the government".