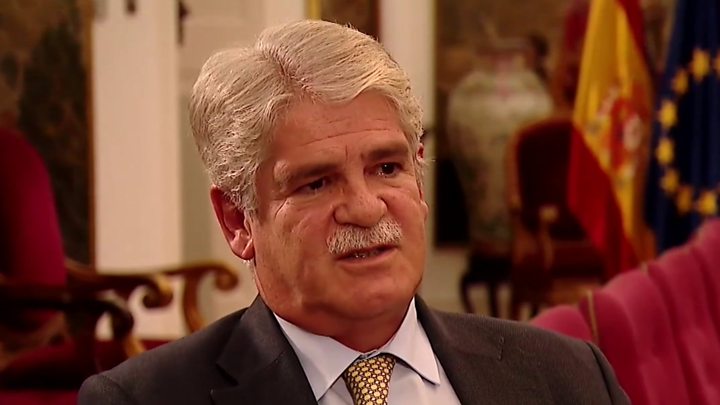 Spain is considering constitutional changes that could allow its regions to hold referendums on independence in the future, the foreign minister says.

Alfonso Dastis has told the BBC a nationwide vote on the issue could be held.

The move is in recognition of the events in Catalonia, where the regional government was deposed after an unilateral declaration of independence.

Protests have been held against the detention of the region's ex-leaders.

What has the foreign minister said?

"We have created a committee in parliament to explore the possibility of amending the constitution to be able to accommodate better the aspirations of some of the Catalan people," Mr Dastis told the BBC.

"We acknowledge there is a political situation that deserves to be looked at but, in any case, it's clear that the decision will be taken, will have to be taken by all Spaniards."

He also said he was sorry if people got hurt during the banned referendum last month, but that there was no disproportionate use of force.

He had previously said some pictures of violence were "fake".

An olive branch to separatists

This appears to be an olive branch to supporters of separatism in Catalonia, who are protesting once again across the region. It offers the prospect of a referendum to change the Spanish constitution and therefore make it legally possible to hold a referendum on Catalan independence.

But what that means in effect, is that the entire population of Spain – 47 million people – would vote on whether Catalonia should have the right to self-determination.

Alfonso Dastis said the legal change might help resolve the Catalan crisis for future generations. But it is a far cry from what deposed Catalan leader Carles Puigdemont had called for, the right for Catalans only to decide.

Mr Puigdemont is now in self-imposed exile in Belgium, sought by Spain to face charges of rebellion following his illegal declaration of independence.

What about the protests?

All major roads and some railway stations have been blocked across Catalonia in demonstrations called by pro-independence groups.

Minor scuffles were reported when police moved in to remove protesters. Hundreds of people also gathered in front of Catalonia's presidential palace in Barcelona.

But a call for a general strike was not backed by the region's major unions, and shops and businesses appeared to be open as normal.

Eight politicians are being held in an investigation by Madrid authorities into alleged rebellion and sedition linked to the declaration of independence.

What else is happening?

In a speech to parliament, Prime Minister Mariano Rajoy called for a big turnout in the snap election called for 21 December so that Spain could get over the crisis.

Pro-independence parties failed on Tuesday to reach an agreement to form a united front for the vote.

Sacked Catalan President Carles Puigdemont and four former advisers fled to Belgium, and an investigating judge is yet to decide whether to execute an EU arrest warrant issued by a Spanish judge last week.