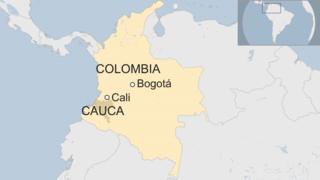 Four people are missing and at least 26 have been injured after a mudslide swept through the town of Corinto in south-western Cauca province.

Emergency workers said the La Paila river burst its banks and swept mud, boulders and branches through the town's centre.

Landslides are not unusual in the mountainous areas of Colombia.

In April more than 300 people were killed in the town of Mocoa, in southern Putumayo province.

President Juan Manuel Santos said firefighters had been deployed from the city of Cali to help residents of the affected area.

Residents have been evacuated as the risk of further mudslides remains high because the river bed is blocked by debris.

Corinto has often featured in the news in Colombia as it was the site of frequent and bloody battles between left-wing Farc rebels and the security forces before the rebels signed a peace deal.