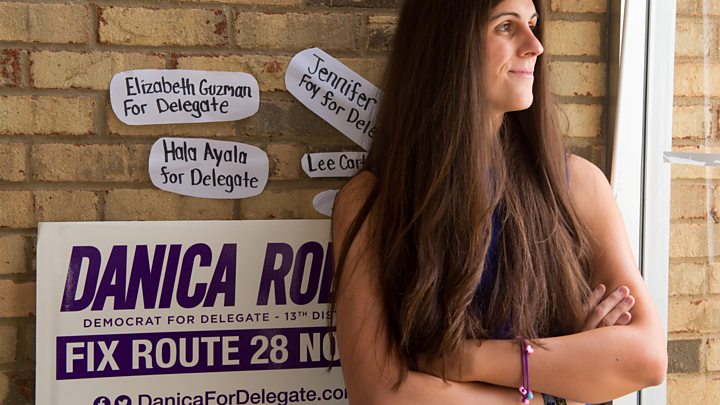 Voters in the US state of Virginia have elected their first openly transgender state legislator.

Mr Marshall had described himself as Virginia's "chief homophobe".

Ms Roem championed gay, transgender and immigrant rights during her campaign, but the race mostly focused on the state's transport infrastructure.

Headlines of the night

Diverse politicians chosen across the US

Mr Marshall had a strong record of opposing equality legislation.

He also introduced a bill that would have banned transgender school students from using the bathrooms of their choice.

Ms Roem is not the first openly transgender state lawmaker in the United States.

Stacie Laughton won a seat in New Hampshire's legislature in 2012, but she resigned before taking office.

A closeted transgender woman, Althea Garrison, won a seat in the Massachusetts legislature in 1992. Ms Garrison was later outed by a conservative newspaper.

Also on Tuesday former television anchor and Democrat Chris Hurst, whose girlfriend was fatally shot on-air in 2015, unseated a Republican incumbent in Virginia's House of Delegates.

Mr Hurst's girlfriend, Alison Parker, and Adam Ward were killed by a former employee of their station WDBJ in Roanoke while broadcasting.