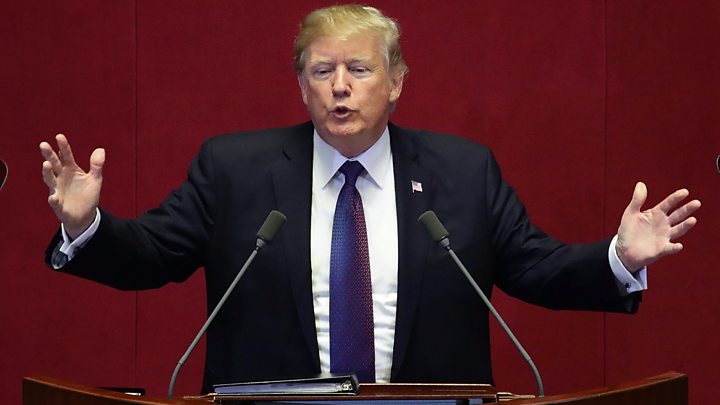 Donald Trump warns North Korea: 'Do not try us'

US President Donald Trump has issued a blunt warning to North Korea's leader Kim Jong-un in an address to South Korea's parliament.

"Do not underestimate us. Do not try us," he said, while also condemning the "dark fantasy" of life in the North.

He addressed Mr Kim saying "the weapons you are acquiring are not making you safer", and urged other nations to join forces to stop Pyongyang.

The US leader is in South Korea as part of a five-nation tour of Asia.

Pyongyang's nuclear ambitions have been high on Mr Trump's agenda throughout this trip. Over the past year North Korea has carried out missile tests in defiance of UN sanctions and in September conducted its sixth and biggest nuclear test.

Mr Trump's words to South Korean lawmakers were being closely watched and while his rhetoric was stark, he did not repeat his previous bombast towards the North.

These are the most striking points from his speech:

Trump made a personal address to Kim Jong-un

In an unexpected move, Mr Trump chose to directly address North Korea's leader in his speech, urging him to discard his nuclear programme and weapons.

"They are putting your regime in grave danger," warned Mr Trump. "Every step you take down this dark path increases the peril you face."

He also made reference to North Korea's founder and Mr Kim's grandfather, Kim Il-sung, in words likely to inflame Pyongyang.

"North Korea is not the paradise your grandfather envisioned. It is a hell that no person deserves."

But Mr Trump also appeared to reiterate Tuesday's offer to reach a deal, saying that "despite every crime you've committed… we will offer you a path for a better future".

He warned the North against 'fatal miscalculation'

He said that to interpret past US restraint as weakness "would be a fatal miscalculation", as there was now a different US administration in place.

"Today, I hope I speak not only for our countries but for all civilised nations, when I say to the North: 'Do not underestimate us. Do not try us'."

He pointed to the heavy US military presence in the Korean peninsula including aircraft carriers and fighter jets, saying: "I want peace through strength."

But he also made sure to single out North Korea's biggest economic supporter, China, as well as Russia, calling on them to sever all ties including economic ones.

After the "rocket man" and "fire and fury", nobody knew quite what to expect from Donald Trump today. In the end, those in the administration urging him to tone down his rhetoric carried sway.

The speech was a warning but not a rush to war. He pushed China and Russia to up their pressure on North Korea. The horror stories of daily life in the North were effective, particularly when compared to liberal South Korea. And the olive branch to Kim Jong-un was the most concrete offer Mr Trump has made yet to the regime.

The problem is: there's virtually no chance that the condition for talks – denuclearisation – will be accepted. Having seen what happened to the leaders of Libya and Iraq, North Korea feels only nuclear weapons will guarantee regime survival. The hermit state will have blocked its population from listening to Mr Trump.

Optimists now say at least there's been no weapons test since September. But the fact that's seen as progress shows how low the bar now is.

Trump compared 'horror' of North with 'miracle' of South

Mr Trump spent a significant portion of his speech paying tribute to the achievements of the South since the Korean War, which cemented the division of North and South Korea.

He contrasted this with the "horror of life" in North Korea and said their separate trajectories were "a tragic experiment in the laboratory of history".

"The more successful South Korea becomes, the more decisively you discredit the dark fantasy at the heart of the Kim regime," he told lawmakers.

While listing South Korea's achievements, Mr Trump also spent considerable time noting its prowess in the golfing world, saying its players are "some of the best on Earth".

Earlier on Wednesday, Mr Trump was forced to drop a surprise visit to the demilitarised zone (DMZ) between North and South Korea due to bad weather.

The US President is travelling to China on Wednesday, and will also be visiting Vietnam and the Philippines this week.

IcetruckNovember 8, 2017
Like story:
tweet
The Latest: Trump granddaughter aids US-China diplomacy
21 Easy Ways to Be The Reason Someone Smiles Today