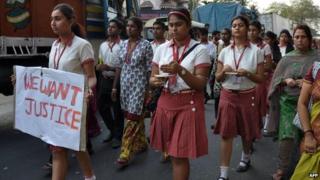 A court in eastern India has sentenced a Bangladeshi man to life in prison for raping an elderly nun in March 2015.

Five other men were jailed for 10 years for robbery during the assault in Ranaghat, West Bengal state. A sixth men was handed a seven-year term for harbouring the attackers.

The 71-year-old nun was attacked after the robbers ransacked her convent.

The gang also stole cash and other items during the attack that sent shockwaves across India and triggered mass protests.

"What happened to the elderly nun is a blot on West Bengal's legacy where Mother Teresa worked for the poor," Judge Kumkum Singha told a packed court on Wednesday.

The nun – who has not been named for legal reasons – underwent surgery after the assault in the Convent of Jesus and Mary. She later moved out of West Bengal.

India has in recent years seen a number of attacks on churches of the country's small Christian community.

The authorities have also strengthened its laws on sexual violence following a fatal gang-rape of a student in the capital Delhi in 2012.