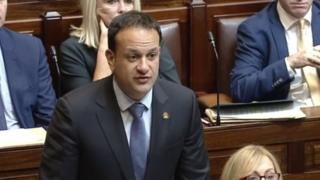 The prime minister of the Republic of Ireland has worn an Irish-themed red poppy badge to remember Irish soldiers who fought in World War One.

Taoiseach Leo Varadkar appeared with the "shamrock poppy" in the Dáil – the parliament in the capital, Dublin.

He is the first leader of the Fine Gael political party to do this.

The move has triggered debate about how more than 200,000 Irish soldiers who served in the British Army are remembered.

"The Shamrock Poppy recognises Irish soldiers who fought in World War One," a spokesman for Mr Varadkar said.

"It was commissioned to commemorate the 100th anniversary of the Great War by the Irish branch of the Royal British Legion.

"Proceeds from the Shamrock Poppy go to Irish veterans and their families, and towards the upkeep to memorials to Irish soldiers in Ireland. All money stays in Ireland," the spokesman said.

A green shamrock is traditionally used as a symbol of the Republic of Ireland.

A red poppy – known as the remembrance poppy – has been used in the UK and several other countries to commemorate servicemen and women killed in all conflicts.

The Anglo-Irish war in 1919-21 led to the partition of Ireland and the creation of the Irish Free State. The Republic of Ireland was declared in 1949.