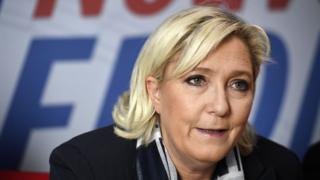 France's parliament has stripped Marine Le Pen of immunity from prosecution over a series of grisly images she published on Twitter in 2015.

A cross-party committee in the National Assembly decided to remove the protection Ms Le Pen enjoys as a deputy in the assembly.

The three images referred to the so-called Islamic State group and were captioned "Daesh is THIS!"

One showed the decapitated body of IS victim James Foley.

Ms Le Pen later deleted that image amid the resultant outcry on social media and from Foley's family, claiming she was unaware of the victim's identity.

The other images showed a tank running over a man in an orange jumpsuit, while another jumpsuit-clad man was shown in a cage being burned alive.

The images resulted in Ms Le Pen being investigated by prosecutors.

In theory, if found guilty she could face a heavy fine or even imprisonment according to French law, but Ms Le Pen has always been protected by her status as an elected official.

Ms Le Pen reacted caustically to Wednesday's decision on Twitter, saying: "Better to be a jihadist returning [to France] from Syria than an MP who denounces the abasement of Islamic State: one takes fewer judicial risks".

This is only the latest attempt by an elected body to pave the way to legal action.

In March, the European Parliament took a similar step to strip the immunity of Ms Le Pen, who was an MEP at the time. But her immunity was restored once she was elected to the National Assembly in June.

She has also been placed under formal investigation over her alleged misuse of European Parliament funds while she was an MEP.

From a strong showing in much of her campaign to become president, Ms Le Pen's fortunes have floundered since – she lost badly to Emmanuel Macron and her party then fared badly in legislative elections.

Many supporters blamed Ms Le Pen's strategy of "detoxification" which won the party only eight seats in the 577-seat National Assembly.