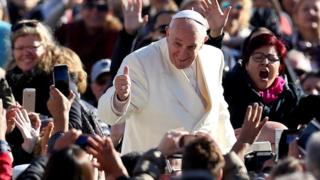 Pope Francis: Mass is for prayers not mobile phones

Pope Francis has chided the Catholic faithful for using their mobile phones during Mass.

He said it made him sad when many phones were held up, and even priests and bishops were taking photos.

The pontiff is not known to have used a mobile phone in public since his election and once asked young people to carry Bibles instead of phones.

However, he is an avid user of social media and regularly allows himself to be snapped with pilgrims for selfies.

Speaking at his weekly audience in St Peter's Square in Rome, Pope Francis said that Mass was a time for prayer and not a show.

"At a certain point the priest leading the ceremony says 'lift up our hearts'. He doesn't say 'lift up our mobile phones to take photographs' – it's a very ugly thing," he said.

"It's so sad when I'm celebrating mass here or inside the basilica and I see lots of phones held up – not just by the faithful, but also by priests and bishops! Please!"