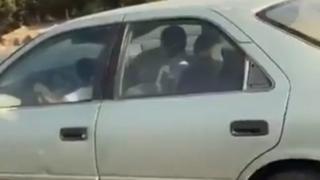 Police in Saudi Arabia have arrested a man after video emerged showing an eight-year-old boy driving a car on a motorway near Jeddah.

The video shows the boy peering over the car's steering wheel as it moves at speed along a four-lane carriageway. A man is seen in the passenger seat.

The police acted after the clip went viral on social media over the weekend.

Many expressed shock and anger at the actions of the owner of the vehicle.

Some said they had witnessed similar incidents elsewhere in the country, with one man posting a video he said showed two boys driving a car in Riyadh.

The standard of driving in Saudi Arabia is considered poor and the Gulf kingdom has one of the world's worst traffic-related death rates.

Last month, the Saudi interior minister said King Salman's decision to lift the ban on women driving from June 2018 would help reduce the number of accidents.

"Women driving cars will transform traffic safety into a pedagogical practice which will reduce human and economic losses caused by accidents," Prince Abdulaziz bin Saud bin Nayef was quoted as saying by his ministry's Twitter feed.