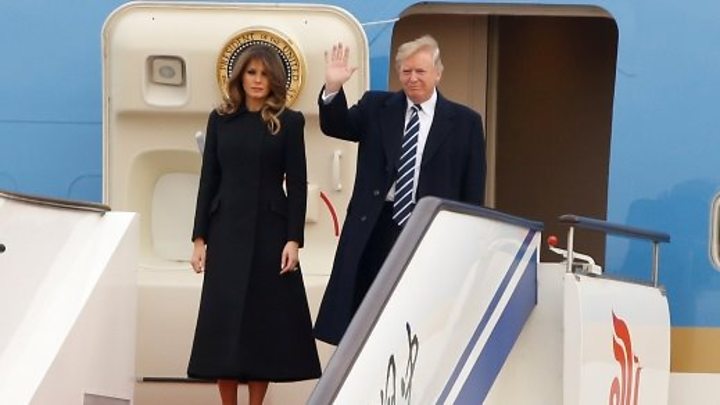 Trump in China for talks with Xi amid N Korea tensions

US President Donald Trump is in China for talks likely to be dominated by tensions over North Korea.

His arrival came after a speech to the South Korean parliament in which Mr Trump urged China to further isolate North Korea.

The White House sees China as pivotal in reining in the North's nuclear aims but Beijing says it is doing enough.

Chinese President Xi Jinping gave a lavish welcome to Mr Trump in what has been called a "state visit-plus".

Before his visit, Mr Trump piled praise on Mr Xi, saying he was looking forward to meeting the Chinese president after "his great political victory".

A red carpet, military band and flag-waving children met Mr Trump and his wife Melania when they arrived in Beijing.

By contrast, when Barack Obama visited China during the final weeks of his presidency there was no red carpet, in what was seen as a calculated snub.

Mr Trump and First Lady Melania Trump then visited the Forbidden City, for centuries the home of China's emperors, followed by afternoon tea.

Chinese state media said Mr Trump showed Mr Xi a video of his granddaughter Arabella singing in Mandarin, with Mr Xi describing the recital as worthy of an "A+".

The Trumps, along with Mr Xi and his wife, were due to dine inside the Forbidden City in what CNN says is an unprecedented honour for a US president.

Later Mr Trump tweeted his thanks to the Chinese leader for "an unforgettable afternoon and evening".

On behalf of @FLOTUS Melania and I, THANK YOU for an unforgettable afternoon and evening at the Forbidden City in Beijing, President Xi and Madame Peng Liyuan. We are looking forward to rejoining you tomorrow morning! https://t.co/ma0F7SHbVU

So the world's first and second most powerful men have met in Beijing. But which one's which?

Side by side, as presidents Trump and Xi stood for photographs at Beijing's Forbidden City, some might wonder.

Mr Trump is seen as weakened at home, beset by scandal and a faltering agenda, and disengaged abroad. Mr Xi is being hailed as the most powerful leader since Chairman Mao, with a vision for Chinese leadership on the global stage.

And while the US president comes here expecting much – help with North Korea, action to reduce the trade deficit – China seems to be seeking little, except in one broad sense.

State media is talking about a "new chapter of history" based on a "major-power relationship". It's not about first or second place any more, it's about parity of esteem.

With a "transactional" US president, less prone to talk about US values, China senses that time may have come.

What Trump said about North Korea

Hours earlier, in the South Korean capital Seoul, Mr Trump described North Korea as "a hell that no person deserves".

North Korea's nuclear weapons programme has sparked international alarm, with Pyongyang carrying out its biggest nuclear test yet in September.

In typically stark language, Mr Trump warned the North: "Do not underestimate us. Do not try us."

But there were hints though he might be open to a deal, telling the North "we will offer you a path for a better future".

Singling out Russia and China, he urged "all responsible nations" to isolate the North, and fully implement UN sanctions, downgrade diplomatic ties and sever trade and technology ties.

China is North Korea's largest trading partner and only major ally, but says it is committed to the UN sanctions and argues its leverage has been overestimated.

Here's another key source of tension

Despite having congratulated Mr Xi on his political ascendency, Mr Trump has been a vocal critic over what he sees as unfair Chinese trade practices.

During his presidential campaign, he called Beijing a currency manipulator and accused it of stealing US jobs.

He is expected to seek ways to reduce what he has called the "embarrassing" US trade deficit with China.

US and Chinese firms have already signed $9bn (£6.9bn) in deals as part of the visit.

There have been questions over whether Mr Trump would use his favoured communications platform Twitter while in China, where it is banned.

But a White House official has said "the president will tweet whatever he wants".

Mr Trump is in China as part of a five-nation tour of Asia. He has also visited Japan so far and will go on to Vietnam and the Philippines.