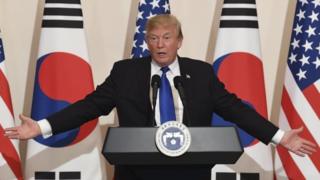 US President Donald Trump has been forced to drop a surprise visit to the demilitarized zone (DMZ) between North and South Korea due to bad weather.

Mr Trump's helicopter took off from US Army Garrison Yongsan in Seoul – but then turned back, US officials said.

The US leader, who is on a two-day visit to South Korea, is due to address South Korea's parliament shortly.

On Tuesday, he urged Pyongyang to "come to the table" and discuss giving up its nuclear programme.

The president has previously threatened "fire and fury" against Pyongyang, prompting a strong reaction from North Korea.

Mr Trump is on a five-nation tour of Asia, and discussing North Korea's nuclear ambitions has been high on his agenda.