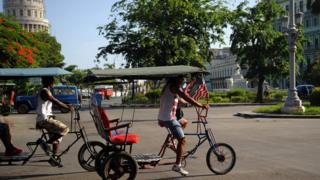 The US administration has published a series of measures increasing limits on Americans' dealings with Cuba.

The package includes a blacklist of state-owned companies and entities, including shops and hotels.

Most US citizens travelling to the island will now have to go as part of organised tour groups.

The measures come as part of a partial rollback of ex-president Barack Obama's policy of engagement with Cuba, as announced by President Trump in June.

Officials have denied that any of these steps are related to the recent acoustic incidents, defined as "health attacks" by the state department against its officials in Havana.

Nevertheless, says BBC Mexico and Central America correspondent Will Grant, the bilateral relationship has now slumped to its lowest point since the George W Bush presidency.

Treasury secretary Steven Mnuchin laid out the new rules, which will take effect on Thursday.

"We have strengthened our Cuba policies to channel economic activity away from the Cuban military and to encourage the government to move toward greater political and economic freedom for the Cuban people," he said in a statement.

According to the statement, the aim is to maintain "opportunities for Americans to engage in authorised travel to Cuba and support the private, small business sector in Cuba".

The measures include a ban on dealings with 180 state-run and military-owned companies.

Restrictions have also been placed on people-to-people exchanges, a travel category under which Americans can stay with families on the island.

From now on, these exchanges can only take place "under the auspices of an organisation subject to US jurisdiction" and accompanied by a representative of that organisation.