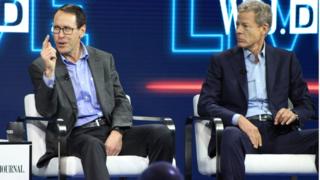 The Trump administration has reportedly demanded sale of assets such as CNN before it would approve an $85bn (£65bn) Time Warner and AT&T merger.

Reports of the negotiations came as an AT&T executive said he no longer expects the deal to close this year.

Competition authorities have been scrutinising the takeover since it was announced in 2016.

Critics, who include US President Donald Trump, say it would concentrate media power.

The proposed purchase by AT&T would combine its force as one of the largest providers of cable TV in the US with Time Warner's entertainment prowess.

At a conference in New York, AT&T chief financial officer John Stephens said "there are all kinds of benefits" to the combination and noted that the government has not blocked this kind of vertical tie-up in decades.

But he told investors that the firm is no longer certain about timing, amid active discussions with the Department of Justice.

He did not discuss the specifics of the negotiations, which Reuters and other media outlets reported based on anonymous sources.

The Department of Justice declined to comment. AT&T said it is prepared to fight any divestitures.

"Throughout this process, I have never offered to sell CNN and have no intention of doing so," chief executive Randall Stephenson said.

AT&T is pursuing the takeover as companies try to respond to upheaval caused by the internet, which is changing the way television and other media reach audiences.

Analysts had expected approval of the deal, so the development was a surprise.

Competition regulators at the Department of Justice are in charge of reviewing the proposal, not the president.

But the president's pick to lead the department's antitrust division was recently installed and is now reportedly involved in the talks.

Regulators are looking at questions such as whether AT&T could raise prices for Time Warner content for other companies – higher costs that could eventually trickle down to consumers.

But she also said its review should be free from White House influence. She cited a report in the New York Times that the White House viewed the pending merger as a possible point of leverage over news coverage.

"Any political interference in antitrust enforcement is unacceptable," she said.

IcetruckNovember 8, 2017
Like story:
tweet
Navy will carry out rare 3-carrier exercise in Sea of Japan
WATCH: ‘Motivated’ podcast: How to gain weight and muscle in a healthy way