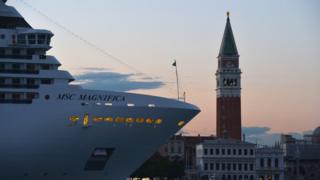 Activists warned the many ships in tourism season were a conservation risk that eclipsed the beauty of the city and flooded it with tourists.

Under the new rule, large vessels will be diverted to a neighbouring industrial town, Marghera.

But it will take four years before the port and the new route are ready, the transport minister said.

"We want it to be clear to Unesco [the United Nations cultural agency] and the whole world that we have a solution," Venice mayor Luigi Brugnaro said.

"This takes into account all the jobs created by the cruise industry, which we absolutely couldn't afford to lose, and we can start to work seriously on planning cruises."

The new plan will divert ships weighing 100,000 tonnes or more away from the historical canal, leaving the waterfront of the iconic St Mark's Square for gondolas and water taxis.

Residents in the city have protested against high numbers of tourists, including earlier this year when people in small boats tried to stop a cruise ship from docking.