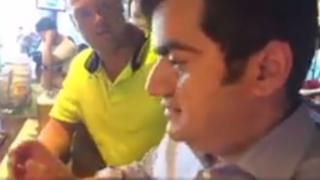 An Australian senator has criticised "the rise of the radical right" after he was racially abused by a group of men at a pub in Melbourne.

Senator Sam Dastyari, who was born in Iran, was harassed with taunts calling him a "terrorist" and "little monkey" during the confrontation on Wednesday.

The incident was filmed and posted on the Facebook page of a group describing themselves as "concerned patriots".

Mr Dastyari says he is considering a legal response to the incident.

In the footage, the senator is surrounded at a bar and told by one man to "go back to Iran, you terrorist", among other taunts.

Mr Dastyari says: "I think you guys are a bunch of racists. You are embarrassing yourself."

Footage taken later shows the men standing over Mr Dastyari as he is seated with friends, who step in to help the senator.

Prime Minister Malcolm Turnbull condemned the abuse, telling the Seven Network that "there is no place for racial vilification in Australia".

Mr Dastyari told the Nine Network that he was regularly harassed by white nationalists, and said that abuse towards politicians was becoming more common.

"They are the sickening face of white nationalists in this country," he told Australia's Nine Network on Wednesday.

"[The abuse] makes me feel small, makes me feel horrible, it makes you feel kind of terrible and that's what they are designed to do."

One man who approached Mr Dastyari, Neil Erikson, told the Australian Broadcasting Corp that the senator "called us rednecks, which is a racist term in fact".

In September, Mr Erikson was one of three men found guilty by a magistrate of inciting contempt of Muslims after the men staged a mock beheading to protest against the building of a mosque.

Mr Dastyari said he feared that young people could be subjected to similar vilification to him and they might not be equipped to handle it.

The Labor senator linked the abuse to the "rise of One Nation right", referring to Senator Pauline Hanson's anti-immigration party.

"I think he's just using this to get publicity to sell his book. I don't see anything in this, I really don't," she said.

The state of Victoria has laws making it illegal to vilify a person or group on the basis of their race or religion.

IcetruckNovember 9, 2017
Like story:
tweet
North Korea, ever so cautiously, is going online
North Korea goes online, but not the World Wide Web for most