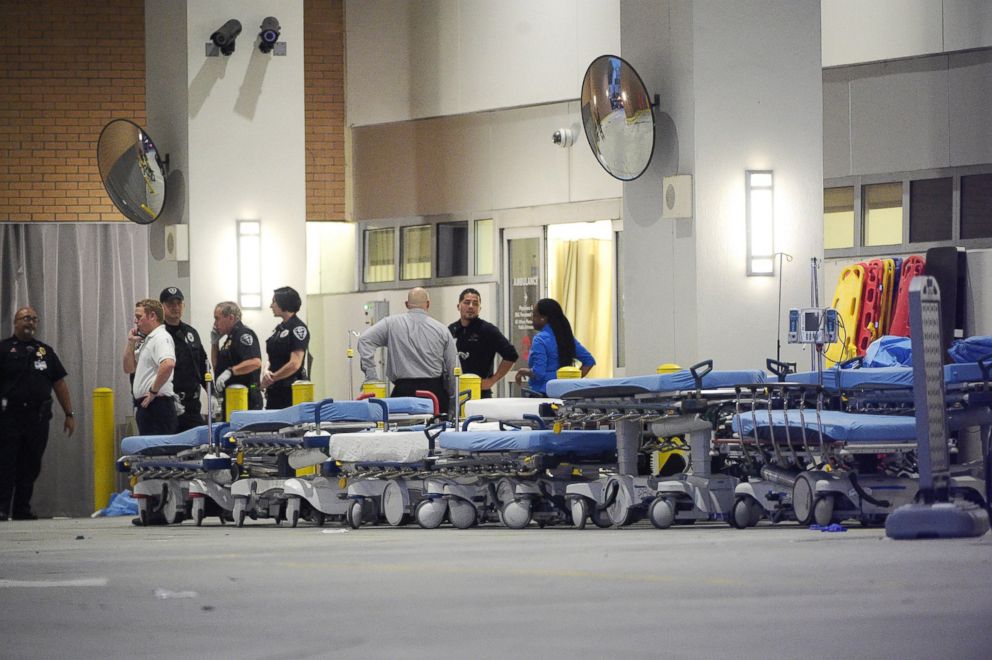 Doctors tell their stories about the effects of mass shootings

On June 12, 2016, Dr. Chadwick Smith was not thinking about mass shootings. Most likely, he was planning for his 10th wedding anniversary celebration, scheduled for three weeks later.

But at 2 a.m., he received a call from the emergency medicine resident at the Orlando Regional Medical Center (ORMC). They would be receiving several gunshot patients, and could Dr. Smith, the trauma surgeon on call, please head for the emergency room ambulance bay? When he arrived, there were patients. More than several.

“The patients just started to roll in … there was one every minute or so, for 20 or 30 minutes,” he said. Panicked, he realized they would need all the help they could find. “Oh my goodness, I’ve have to get everybody in here, what are we going to do with all these patients?”

Dozens poured in, some dead at the door, others needing active resuscitation. Doctors were doing chest compressions in the hallway, some were opening patients' chests to stop the bleeding.

ORMC received 50 victims that night — 9 died. Smith says he cried the entire way home. The emotional effects of the Pulse nightclub shooting didn’t set in that night, or even in the nights and weeks immediately after. It was when he arrived to Los Angeles to celebrate his wedding anniversary with his wife that he realized their depth.

"I was unable to experience joy. I kept thinking about Pulse nightclub," he said. "That’s when it hit me."

Pulse nightclub attack survivors a year later: 'I might still be in shock'

While the struggles of the victims and their families have been chronicled extensively, the experience of medical providers –- who people depend on to get victims through the immediate aftermath of these events — may be overlooked.

“There's an assumption that someone who is medically trained is also trained to attend to the emotional side of themselves, and that’s not always true,” said Dr. Daniel Mosley, a clinical psychologist and volunteer with the American Red Cross Disaster Mental Health services.

He and others like him are there in the aftermath of mass violence — to speak with providers and survivors and help them cope.

Other doctors are charged with caring for victims of violence on a regular basis, but that doesn’t make it any easier or prepare them for what comes in the wake of a mass event.

Dr. Camilla Sasson arrived for her late-night shift at the University of Colorado Hospital Emergency Department on July 19, 2012. She had been trained to handle victims of gun violence, even large numbers hurt by gang fights.

But there was nothing in her training to prepare her for the events of that night, when a gunman fired 76 shots into a crowd gathered for a midnight screening of the latest Batman movie.

“Every time a car backfires, it brings me back to that horrific scene and I think ‘Oh God, is it happening again?’” said Sasson. Her emergency room received 23 victims, one of whom was dead on arrival.

What was surprising to Sasson was not only how long-lasting the effects of that night would be on her psyche, but how important her community would be.

“Resources in the weeks after aren’t sufficient, they need to be there for months,” she continued. “For everybody in the hospital, from the doctors and nurses down to the people who clean the floors and work in the cafeteria.”

Providers are natural caretakers, Mosley said, and many enter the field for altruistic reasons, to help. The very act of treating patients can be an act of therapy for them.

And their anger can be much more profound when a disaster of such proportion is caused by another person, as opposed to something like a natural disaster. When it’s man made, there is “additional fear and anxiety on everyone’s part.”

As the U.S. continues to endure a steady stream of mass shootings, more data is available on how these events affect people, and how best to respond.

Dr. Joshua Morganstein is the assistant director at the Center for the Study of Traumatic Stress. He said one of the most significant protections against bad reactions to trauma, even for doctors, is “community collective efficacy,” or how much they seek assistance from neighbors.

A look back at the Aurora, Colorado, movie theater shooting 5 years later

About two weeks after the Aurora shooting, Sasson had several people over to her house. She said it was helpful realizing that the experiences were shared by others.

In Orlando, Smith engaged in a similar approach, attending talk sessions facilitated by ORMC. Initially, he didn’t think he needed to attend such a session. But he ultimately went, and found the connection to others therapeutic.

Both psychologists and the doctors themselves said that having plans for mass shooter events can make a big difference. The sensation of shock and helplessness can cause the greatest fear, according to Morganstein, and running through disaster scenarios, both at work and at home, can help. Respectfully covering victims during the events can also help reduce the visual exposure for doctors.

A sense of humor also doesn’t hurt, Morganstein added. “Gallows humor” that makes light of serious medical events is a normal way to cope with death when exposed to it repeatedly.

For caretakers, processing the experience can take some time.

“Psychological supports may be needed, for much more than the days or weeks after an incident,” Sasson said.

“There is a club of providers out there that have taken care of the victims of these shootings, a club that none of us ever wanted to be a part of," she added, "and unfortunately our numbers are increasing every day.”