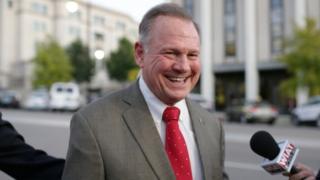 An Alabama candidate for the US Senate is denying allegations that he sexually abused a 14-year-old girl.

Roy Moore, a Republican firebrand, said claims that he preyed on a teenager while he was a 32-year-old prosecutor were "completely false".

Leigh Corfman and three other women say Mr Moore made sexual advances on them when they were between the ages of 14 and 18, the Washington Post reports.

Senate Republicans said Mr Moore must step aside if the claims are true.

Mr Moore, who is now 70, said in a statement to the Post: "These allegations are completely false and are a desperate political attack by the National Democrat Party and the Washington Post on this campaign."

The Christian conservative's team said in another statement about the allegations, "this garbage is the very definition of fake news and intentional defamation".

The campaign's statement pointed to father-of-four Mr Moore's nearly 33-year marriage, arguing that "if any of these allegations were true, they would have been made public long before now".

Mr Moore, a populist former chief justice in the state, has been widely expected to defeat a Democratic rival, Doug Jones, in a December election for the open seat left by US Attorney General Jeff Sessions.

The Washington Post article alleges that in 1979 Mr Moore, who was then an assistant district attorney, struck up a conversation with Ms Corfman, who was 14.

An Alabama Senate race that was uncomfortable for many Republicans just became downright painful. Roy Moore was never the choice of the party's leadership – Senate Majority Leader Mitch McConnell and others talked President Donald Trump into supporting the incumbent, Senator Luther Strange – but they grudgingly fell in line behind the controversial former judge. Now they're on the verge of falling off a political cliff and losing a safe seat in the closely divided US Senate.

The problem for Republicans is, by law, it's too late to take Mr Moore's name off the ballot even if he decides to quit the race, which – given his history of bucking authority, judicial and otherwise – is no sure bet.

A conservative could try a write-in campaign, but those are notoriously difficult to pull off even when there's more than a month until election day.

Polls had already shown a close race between the Republican and Democrat Doug Jones, in part because Mr Moore, who rails against Muslims and homosexuals, has alienated many moderate conservatives in the state.

The 12 December vote could be a good test of whether there is ever a scenario in which deep-red Alabama could elect a Democrat to state-wide office.

She told the newspaper she had been sitting with her mother on a park bench outside a court in Etowah County, Alabama, ahead of a child custody hearing in her parents' divorce case.

"He said, 'Oh, you don't want her to go in there and hear all that. I'll stay out here with her'," the accuser's mother, Nancy Wells, claims.

"I thought, 'How nice for him to want to take care of my little girl'," she told the Post.

In the coming days, Mr Moore allegedly picked up Ms Corfman around the corner from her home, and drove her to his house in the woods where he sexually assaulted her, the newspaper claims.

The age of consent in Alabama is 16.

Three other women contacted by the Post said that they were approached by Mr Moore decades ago when they were aged between 16 and 18.

The women, who the paper says do not know each other and were reluctant to speak out, alleged that Mr Moore had taken them out on dates and kissed them.

One of the accusers said she was a 14-year-old working as Santa's helper at a shopping centre when Mr Moore first targeted her.

Reacting to the report, Senate Majority Leader Mitch McConnell told reporters "if these allegations are true, he must step aside".

A number of other Republican senators swiftly echoed that sentiment.

Arizona's John McCain was among those calling unequivocally on Mr Moore to withdraw from the race.

There were also calls for Mr Moore's defeated primary opponent, Luther Strange, to run against him as an independent candidate in next month's election through a so-called write-in challenge.

The allegations against Roy Moore are deeply disturbing and disqualifying. He should immediately step aside and allow the people of Alabama to elect a candidate they can be proud of.

Mr Moore lost his position as the state's top judge twice. The first time, he had flouted a court order to remove a Ten Commandments monument from the courthouse.

When the people of Alabama elected him to the court again, he was suspended a second time for defying the US Supreme Court's 2015 ruling legalising gay marriage.

He was quoted as saying that even if the Washington Post report were true, "it's much ado about very little".

Mr Zeigler told the Washington Times newspaper: "Also take Joseph and Mary. Mary was a teenager and Joseph was an adult carpenter. They became parents of Jesus."