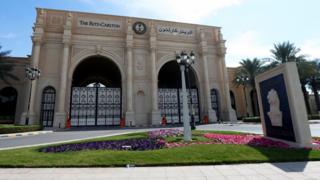 Saudi Arabia's attorney general says at least $100bn (£76bn) has been misused through systemic corruption and embezzlement in recent decades.

Sheikh Saud al-Mojeb said 199 people were being held for questioning as part of a sweeping anti-corruption drive that began on Saturday night.

He did not name any of them, but they reportedly include senior princes, ministers and influential businessmen.

"The evidence for this wrongdoing is very strong," Sheikh Mojeb said.

He also stressed that normal commercial activity in the kingdom had not been affected by the crackdown, and that only personal bank accounts had been frozen.

Sheikh Saud al-Mojeb said investigations by the supreme anti-corruption committee, which was formed by royal decree and is headed by 32-year-old Crown Prince Mohammed Bin Salman, were "progressing very quickly".

He announced that 208 individuals had been called in for questioning so far, and that seven of them had been released without charge.

"The potential scale of corrupt practices which have been uncovered is very large," the attorney general said.

"Based on our investigations over the past three years, we estimate that at least $100bn has been misused through systematic corruption and embezzlement over several decades."

Sheikh Mojeb said the committee had a clear legal mandate to move on to the next phase of its investigation and that it had suspended the bank accounts of "persons of interest" on Tuesday.

"There has been a great deal of speculation around the world regarding the identities of the individuals concerned and the details of the charges against them," he added.

"In order to ensure that the individuals continue to enjoy the full legal rights afforded to them under Saudi law, we will not be revealing any more personal details at this time. We ask that their privacy is respected while they continue to be subject to our judicial process."

IcetruckNovember 9, 2017
Like story:
tweet
After repeated tests, North Korea hasn’t launched a missile in 56 days. Why?
Indian city rounds up beggars ahead of Ivanka Trump’s visit