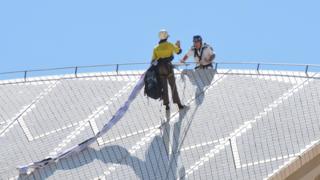 Activists have scaled the Sydney Opera House to protest against Australia's treatment of asylum seekers in Papua New Guinea (PNG).

However about 600 of those men are refusing to leave, citing fears for their safety in the local community.

Five people were arrested in Sydney on Thursday after trying to unfurl signs calling for the men to be evacuated.

Under a controversial policy, Australia has detained asylum seekers who arrive by boat in detention camps on Manus Island and Nauru, a small Pacific nation.

Australia shut down the Manus Island centre last week after a PNG court ruled it was unconstitutional, urging asylum seekers to move to transit centres elsewhere on the island.

The government has steadfastly ruled out allowing the men into Australia, arguing it would prompt further human trafficking and lead to deaths at sea.

Asylum seekers on Manus Island say they fear violent attacks if forced to move to the transit centres, despite losing access to electricity and running water more than a week ago.

"This brutal policy [of offshore detention] has reduced us as a nation and a community," one activist who climbed the Sydney Opera House, Marco Avena, said in a statement.

"We act today in the interest of our own humanity not just the humanity of those left on Manus Island."

The two men and three women arrested in Sydney were skilled climbers, according to a protest group calling itself the Whistleblowers, Activists and Citizens Alliance.

Police said they were questioning the protesters.

Activists from the group staged a similar demonstration on a crane near the Melbourne Cup, Australia's most prominent horse race, on Tuesday.

The UN's refugee agency has described the stand-off in PNG as an "unfolding humanitarian emergency". It says a majority of the men have refugee status.

IcetruckNovember 9, 2017
Like story:
tweet
Hundreds of fish die at Tokyo aquarium due to lack of oxygen
Sainsbury’s suffers 9% fall in half-year profits