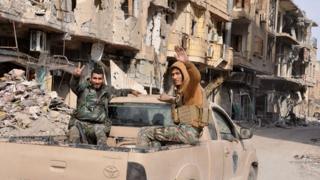 The state-run al-Ikhbariya channel said troops and militiamen had "fully liberated" the town on Wednesday night.

But the official Sana news agency and state TV said they had destroyed IS defences and were engaged in fierce confrontations inside Albu Kamal.

Sana also said troops had met up with Iraqi forces on the nearby border.