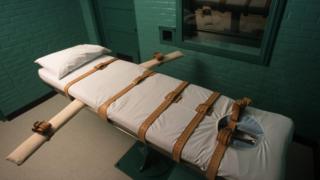 The state of Texas has executed a Mexican national, sparking an outcry over his human rights.

Ruben Cardenas Ramirez was pronounced dead at 22:26 (04:26 GMT) after receiving a lethal injection.

He had been convicted of the 1997 kidnap, rape and murder of his 16-year-old cousin, Mayra Laguna.

Mexican President Enrique Peña Nieto condemned the execution, saying it violated a UN ruling on the treatment of Mexican prisoners in the US.

The sister of the murdered girl was quoted by AFP news agency as saying the execution had brought "true peace" to the family.

Mexico abolished the death penalty in 2005.

"I firmly condemn the execution of Ruben Cardenas Ramirez in Texas, which violates [the] ruling of the International Court of Justice," Mr Peña Nieto tweeted.

In 2004, the ICJ, a UN body, found in a judgment that the US had breached its obligations under international law by not notifying the Mexican authorities about the arrest of 51 of its nationals, including Cardenas, and had denied them "the right to consular assistance from their government."

Carlos Gonzalez Gutierrez, the Mexican consul general in Texas, was quoted by AFP as saying: "For the government of Mexico this is not an issue about culpability or innocence, but about respect for human rights and due process."

Relations between Mexico and the US have been tense over President Donald Trump's plan to build a border wall as part of his administration's efforts to control immigration, insisting Mexico should pay for it.