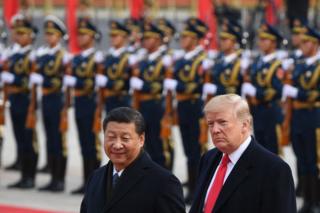 Trump and Xi begin talks after lavish welcome in China

US President Donald Trump has begun talks with Chinese leader Xi Jinping in Beijing, following his lavish welcome to the Chinese capital.

Mr Trump is expected to raise how China can rein in North Korea's nuclear aims, an issue dominating his Asia tour.

The US wants China, Pyongyang's main ally, to apply further pressure, but Beijing says it is doing enough.

The leaders of the world's two largest economies are also expected to discuss their trade deficit.

Earlier in the five-nation trip, Mr Trump urged North Korea to make a deal to end its nuclear weapons programme, while also warning it against further provocation against the US and the world, saying: "Do not try us."

He also urged China to sever ties with Pyongyang and reiterated calls for Beijing to ramp up pressure. China has maintained it is doing all it can and insists it is fully enforcing UN sanctions.

The US leader will also meet business leaders and will attend a state dinner later on Thursday.

Mr Trump flew into Beijing on Wednesday and was greeted with great pomp and ceremony, in what was billed as a "state visit-plus".

It prompted at least two tweets from Mr Trump where he enthusiastically thanked Mr Xi.

Looking forward to a full day of meetings with President Xi and our delegations tomorrow. THANK YOU for the beautiful welcome China! @FLOTUS Melania and I will never forget it! pic.twitter.com/sQoUWIGAiQ

On behalf of @FLOTUS Melania and I, THANK YOU for an unforgettable afternoon and evening at the Forbidden City in Beijing, President Xi and Madame Peng Liyuan. We are looking forward to rejoining you tomorrow morning! https://t.co/ma0F7SHbVU

Mr Trump has tweeted at least four times since arriving in China – where Twitter is banned. But a White House official told reporters that he would "tweet whatever he wants".

Mr Trump is in China as part of a five-nation tour of Asia. He has already visited South Korea and Japan, and will go on to Vietnam and the Philippines later in the week.

IcetruckNovember 9, 2017
Like story:
tweet
North Korea goes online, but not the World Wide Web for most
Trump optimistic on trade, North Korea after China talks