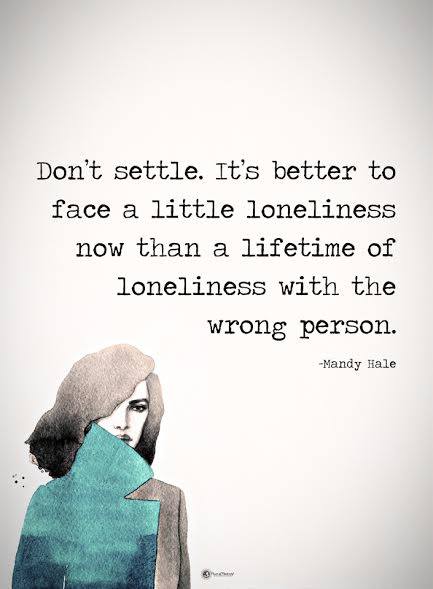 What happens when your relationship seems to be bringing more stress than it does happiness? Do you find that you have settled for a relationship that’s less than perfect? Perhaps you find yourself making excuses and simply hoping that you’re going through a rough patch, and things are going to get better.

While relationships can’t be all high, they definitely shouldn’t be all low, either! Here are some signs that your relationship is going through more than just a rough patch – and that maybe it’s time to get out.

1. YOU START THINKING OF YOUR RELATIONSHIP AS “GOOD ENOUGH”

Any relationship is better than none, and you find that you would rather stay in a relationship that isn’t making you happy rather than endure being alone. If you find yourself thinking this, it’s a sign that your relationship is only going to be a source of stress, and that finding a way out will bring a joy to your life you didn’t know was missing.

2. IT’LL ALL WORK OUT … EVENTUALLY

If you find that you keep tacking on “eventually” to the thought of your relationship working out, it is a sign that your relationship isn’t working out at all. No matter what you do to try and fix it, it just doesn’t seem to be working, so you hold out hope that maybe it’ll all just work itself out… except this waiting starts to drag on and on, and you’re not sure if it’ll ever end.

This is a sign that the relationship would probably be better if it was over entirely. Don’t underestimate the stress that holding out hope for a dragging relationship can cause! You deserve a relationship that isn’t all waiting and hoping.

3. YOU’RE WAITING FOR YOUR PARTNER TO CHANGE … SOMEDAY

People can and do change. People grow into whole new personalities, opinions and ideas. However, if you’re staying with a partner who is making you unhappy in the hopes that one day they’ll finally grow into the person you need them to be, you’ll only be setting yourself up for hurt. You deserve a relationship where the other person is already who you need them to be! Waiting for someone to change, or trying to force that change, will only lead to more stress and destruction.

A sign of an unhealthy and unhappy relationship is feeling guilt for thinking about leaving your partner. Perhaps your partner is dependent on you for whatever reason: emotionally, mentally, financially. You know that the relationship isn’t working, but instead of walking away, you allow guilt to keep you. This isn’t a good reason to stay, not for you or for your partner.

Relationships should be founded on trust, love and communication – not guilt. It might hurt, but you can still help them get the support they need, just not as a romantic partner.

6. YOU’RE STAYING FOR THE KIDS

Sometimes, people stay in relationships that have long passed their expiration date because children are involved. If they’re quite young, this might seem like a good thing. However, the older they get, the more that children can realize what’s going on. Staying with a partner for the children can easily cause resentment, and will only create a messier split down the line.

According to Psychotherapist Sean Grover, “Staying in a toxic marriage is certain to cause children more damage than good. In many cases, children blame themselves, feeling their parents’ combative relationship is somehow their fault.” Children can be negatively affected by an unhappy relationship just as much as you can. Sometimes, making the decision to part ways is best for everyone.

7. THE ONLY THING GOOD ABOUT THE RELATIONSHIP IS THE SEX

If you and your partner don’t get along, don’t enjoy spending time together, and can’t seem to compromise, but the sex is phenomenal … this is probably a sign that the relationship just isn’t going to work. Physical intimacy is important, but it won’t fix a relationship that doesn’t have all the rest of the foundations. Luckily, this is an issue that can be caught early, so it’s important to keep in mind how you’re going to feel in the long run.

8. YOU FEEL FORCED TO COMPROMISE

According to adjunct professor of psychology at Georgetown University, Andrea Bonior, “One of the first signs of a toxic relationship is when one partner is very controlling. It can simply be that you feel frightened to share your opinions—you’re constantly walking on eggshells because you’re afraid of your partner’s emotional reactions.”

Relationships can have both highs and lows. Not every relationship you have is going to have the honeymoon phase last forever, and that’s okay! Relationships change, people change, but the important thing is that the relationship stays healthy. Even through all the bad times, relationships are meant to be a source of strength and support. If you find that your relationship is hitting some, or all, of these points, it may be time to reconsider what is going to make you happiest in the long run.

References:
30 Signs You’re in a Toxic Relationship http://www.health.com/health/gallery/0,,20976691,00.html#relationship-red-flags-0
4 Reasons Why Bad Marriages Are Worse for Kids Than Divorce
https://www.psychologytoday.com/blog/when-kids-call-the-shots/201703/4-reasons-why-bad-marriages-are-worse-kids-divorce

IcetruckNovember 10, 2017
Like story:
tweet
8 Reasons You Should Have an Escape Room Party
Texas couple flies family they saw in ABC News report on Puerto Rico to New York