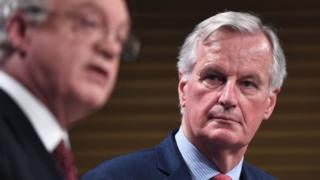 The UK has two weeks to clarify key issues or make concessions if progress is to be made in Brexit talks, the bloc's chief negotiator has said.

Michel Barnier was speaking after meeting the Brexit secretary for talks on citizens' rights, the Irish border, and the UK's "divorce bill".

David Davis said it was time for both sides "to work to find solutions".

Before the talks, Theresa May said she wanted the UK's exit date set in law, and warned MPs not to block Brexit.

Speaking at a press conference in Brussels, Mr Barnier suggested Britain would have to clarify its position in the next fortnight on what it would pay to settle its obligations to the EU if the talks were to have achieved "sufficient progress" ahead of December's European Council meeting.

"It is just a matter of settling accounts as in any separation," Mr Barnier said.

Mr Barnier also said both sides had to work towards an "objective interpretation" of Prime Minister Theresa May's pledge that no member of the EU would lose out financially as a result of the Brexit vote.

The Brexit secretary insisted good progress was being made across the board, and that the negotiations had narrowed to a "few outstanding, albeit important, issues".

Mr Davis and Mr Barnier agreed there had been progress on the issue of settled status for EU citizens in the UK after Brexit.

Mr Barnier said the UK had provided "useful clarifications" on guaranteeing rights, although more work needed to be done on some points including rights of families and exporting welfare payments.

For the UK's part, Mr Davis said, the government had "listened carefully" to concerns and that there would be a "streamlined and straightforward" process for EU nationals to obtain settled status.

But Mr Davis rejected a suggestion that Northern Ireland could remain within the European customs union.

He was responding to a European Commission paper, which proposed that Northern Ireland may have to remain a member of the EU's single market or customs union, if a so-called "hard border" with the Irish Republic is to be avoided.

Saying there had been "frank discussions" with Mr Barnier and his negotiators on the issue of the Irish border, Mr Davis insisted there could be "no new border" inside the UK.

"We respect the European Union desire to protect the legal order of the single market and the customs union, but that cannot come at cost to the constitutional and economic integrity of the United Kingdom," Mr Davis told reporters in Brussels.

"We recognise the need for specific solutions for the unique circumstances of Northern Ireland. But let me be clear – this cannot amount to creating a new border inside our United Kingdom," he added.

But Mr Barnier said the "unique situation" on the island of Ireland required "technical and regulatory solutions necessary to prevent a hard border".

Looking ahead to December's EU summit, Mr Davis pledged the UK was "ready and willing" to engage with Brussels "as often and as quickly as needed".

"But we need to see flexibility, imagination and willingness to make progress on both sides if these negotiations are to succeed and we are able to realise our new deep and special partnership," he said.

Friday's update came as Prime Minister Theresa May announced she wanted the date the UK leaves the EU – 29 March 2019 – enshrined in law.

The prime minister said the decision to put the specific time of Brexit "on the front page" of the Brexit bill showed the government was determined to see the process through.

"Let no-one doubt our determination or question our resolve, Brexit is happening," she wrote.

The draft legislation has already passed its second reading, and now faces several attempts to amend it at the next part of its parliamentary journey – the committee stage.

Mrs May said the government would listen to MPs if they had ideas for improving the bill, but warned against attempts to halt the process.

"We will not tolerate attempts from any quarter to use the process of amendments to this bill as a mechanism to try to block the democratic wishes of the British people by attempting to slow down or stop our departure from the European Union."