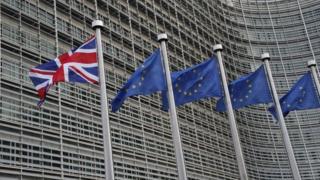 "Some progress" has been made in the Brexit talks, the EU's Michel Barnier has said, following the latest round of negotiations with the UK in Brussels.

He was speaking after meeting Brexit Secretary David Davis for further talks on citizens' rights, the Irish border, and the UK's "divorce bill".

Mr Davis said it was time for both sides "to work to find solutions".

Before the talks, Theresa May said she wanted the UK's exit date set in law, and warned MPs not to block Brexit.