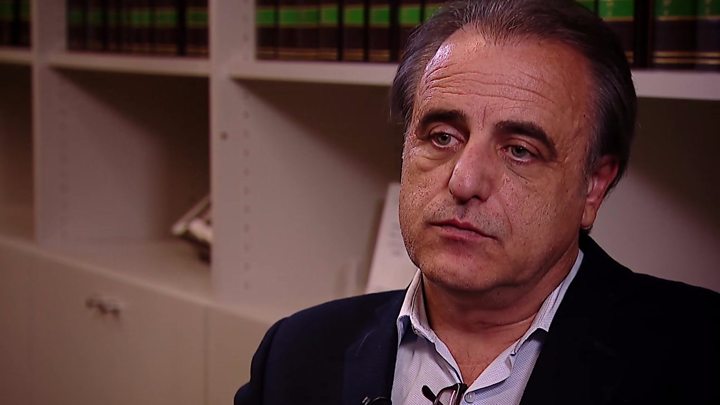 A lawyer whose firm represents two imprisoned former Catalan ministers says their situation was made worse by the self-imposed exile of deposed Catalan President Carles Puigdemont.

Pau Molins told the BBC he believes Mr Puigdemont, who fled to Belgium, should have stayed in Spain to fight his case.

He says it meant the justice system was able to justify jailing the ministers.

Eight sacked members of the Catalan government are being detained over an illegal declaration of independence.

They, alongside Mr Puigdemont, are being investigated for alleged rebellion and sedition following a banned independence referendum on 1 October, in defiance of the central authorities in Madrid.

Mr Molins told the BBC on Friday that legally, Mr Puigdemont's situation will be worse the longer he stays in Belgium and continues to avoid the allegations against him.

Last week, a Spanish judge issued an EU arrest warrant for him and four of his allies. Mr Puigdemont later handed himself in to Belgian police. He has been released on bail until a judge decides whether to execute the warrant or not.

He described their situation as "the same of any prisoner facing criminal charges, with family access reduced to a few hours once a week". But he says the men were "humiliated" by the police as they drove them to prison from court.

His comments come the same day the former speaker of Catalan Parliament, Carme Forcadell, was released on bail, following a night in prison in Madrid where she faces similar charges.

It was exactly two weeks ago when separatist ministers voted for independence in the Catalan parliament, and subsequently illegally declared the region, a new state.

The Spanish government has since taken control of the region's government, dissolved parliament and called a snap election for 21 December.