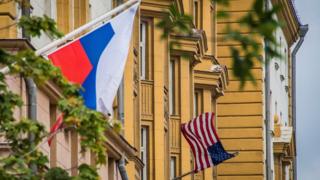 Firm founded by KGB spy to guard US Moscow embassy

The US State Department has employed a private firm set up by a veteran Soviet-era spy to provide security for its Moscow embassy and diplomatic missions in Russia.

The move comes after Moscow ordered the US to more than halve its staff in Russia earlier this year.

The US has now signed a contract with Elite Security Holdings, founded by the ex-KGB General Viktor Budanov.

General Budanov was a close friend of British spy and defector Kim Philby.

A notice on the US State Department website shows the contract with Elite Security Holdings is worth more than $2.8m (£2.1m).

A document posted online outlining "justification and approval" for the contract says guards at the Moscow embassy and other US missions were among the staff included in the expulsion order, adding: "The only option available, to ensure security services continue, is via a commercial contract."

It said the US government had contacted more than three US private security firms but had not found one "with the requisite licensing or desire to operate in-country".

"Due to the urgency of this requirement, the Department of State sought a firm with the requisite licensing and capacity to quickly stand up guard operations at all four US Mission Russia posts," it says.

"The number of firms that met this requirement limited the number of sources considered to one – Elite Security Services Holding Co."

On its website, the security company says it operates across Russia, Europe and countries formerly in the Soviet Union.

In July, Russian President Vladimir Putin said staff numbers at US diplomatic missions in Russia would have to be slashed by 755, in retaliation for new US sanctions against Moscow.

The sanctions were intended as punishment for the Russian annexation of Crimea in 2014 and alleged Russian interference in the US election.

Last December, then President Barack Obama ordered the expulsion of 35 Russian diplomats, along with the closure of two compounds, in response to allegations of election meddling.

President Donald Trump has since been dogged by claims that Russia tried to sway the election in his favour, allegations that both he and the Kremlin strongly deny.

Several investigations are under way to determine whether anyone from the Trump campaign colluded with Moscow.

General Budanov became one of the KGB's most illustrious agents.

He befriended Kim Philby after the British double-agent's defection to the Soviet Union in 1963.

In a 2007 interview, Gen Budanov said that in the late 1980s he had served in the KGB mission in East Germany and worked alongside Mr Putin.