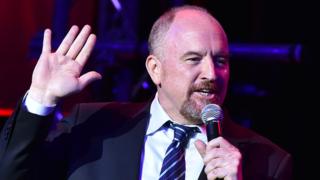 The release of US comedian Louis CK's new movie has been scrapped after five women levelled sexual misconduct allegations against him.

I Love You Daddy was due to have been released in the US on 17 November.

But it was dropped after four accusers told the New York Times he masturbated during interactions with them and a fifth said he had asked to do so.

Distributors The Orchard said: "The Orchard will not be moving forward with the release of I Love You, Daddy."

The Emmy-winning comic has not commented.

He wrote, directed and acted in I Love You Daddy, a comedy about an ageing film director, played by John Malkovich, who has a reputation for getting embroiled with young women.

Louis CK appears as a successful TV writer whose 17-year-old daughter, played by Chloe Grace Moretz, begins a relationship with the director.

On Thursday, its premiere was cancelled hours before the screening.

Meanwhile, Netflix has cancelled plans for a second stand-up special with the comedian.

In a statement to US media, Netflix said: "The allegations made by several women in The New York Times about Louis CK's behaviour are disturbing.

"Louis's unprofessional and inappropriate behaviour with female colleagues has led us to decide not to produce a second stand-up special, as had been planned."

In Thursday's New York Times report, four comediennes – Dana Min Goodman, Julia Wolov, Rebecca Corry and Abby Schachner – and a fifth woman, who spoke on condition of anonymity, made allegations about the entertainer.

Goodman and Wolov said Louis CK stripped naked and masturbated after inviting them to his hotel room during the US Comedy Arts Festival in Aspen, Colorado, in 2002.

A fifth woman, who did not want to be named, told the newspaper of alleged incidents involving the comic in the late 1990s, while she was working in production on The Chris Rock Show.

Louis CK, who was a writer and producer on the show, repeatedly asked her to watch him perform a sex act, she said. "He abused his power," she said.

Louis CK's planned appearance on The Late Show with Stephen Colbert was cancelled and HBO announced it would purge Louis CK's past projects from its On Demand service.

IcetruckNovember 10, 2017
Like story:
tweet
Firm founded by KGB spy to guard US Moscow embassy
WATCH: ‘GMA’ Hot List: What to know about kids and dairy allergies