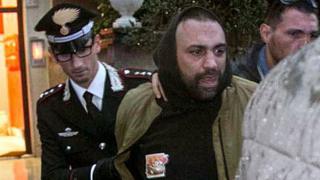 Italian police have arrested the brother of a jailed mobster in a Rome suburb for a bloody assault on a TV journalist that shocked the nation.

Roberto Spada headbutted the Rai TV journalist, breaking his nose, then chased the film crew away, lashing out with a baton. The cameraman continued filming during the attack in Ostia.

His brother Carmine is serving 10 years in jail for extortion and mafia links.

The injured journalist, Daniele Piervincenzi, was suddenly headbutted on Wednesday while asking Mr Spada whether his family had supported CasaPound, a far-right group.

Mr Spada was being interviewed on the doorstep of his local gym when he suddenly lashed out. "You've broken my nose," Piervincenzi groaned as the attack continued.

Rome Mayor Virginia Raggi tweeted the video of the attack, with the message: "The Spada clan's violence is unacceptable. Solidarity to the journalist and film-maker of @NemoRai2 attacked in Ostia. We will stop crime and extremism in Rome."

She plans to hold a rally on Saturday against violence in Ostia, a seaside town 22.5km (14 miles) from Rome. CasaPound won 9% of the vote in a local election there last Sunday,

Two years ago the Ostia town council was disbanded because it had been infiltrated by the mafia.

How a winemaker is taking on Sicily's rural Mafia

A second round of voting is scheduled in Ostia for 19 November. The journalists from Rai – Italy's national, state-owned broadcaster – were investigating a sharp rise in support for neo-fascist CasaPound and their possible links to the Spada Mafia clan.

CasaPound's vice-president Simone Di Stefano called the attack "deplorable" and stressed that Roberto Spada was not a party member.

He called for the prosecutor's office "to clarify for us, for you and for everyone, whether there is any truth in the accusation of collusion between us and a mafia clan".

CasaPound has little support nationally. There is much hardship in Ostia, and CasaPound hands out food to poor Italians there, Reuters news agency reports.

In a Facebook post, later deleted, Mr Spada apologised but said the journalists had frightened his son.

In ancient Rome the port of Ostia was a major trade hub, importing vast quantities of goods to sustain the empire.