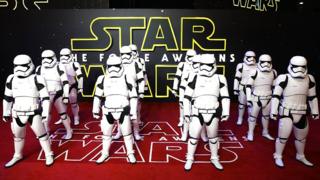 The company said it had struck a deal with Rian Johnson, director of the upcoming "Star Wars: The Last Jedi", to create a new trilogy of the science fiction blockbuster.

Disney is also working on a live-action Star Wars series for a new online streaming service.

The news overshadowed Disney's first drop in annual profits since 2009, amid steep competition from online rivals.

Disney's shares fell initially in after-hours trading on the release of its results, but they then rallied to 1% higher on news of the new Star Wars movies.

Chief executive Bob Iger said: "We remain optimistic about our future, in part because quality truly does matter."

The entertainment giant also plans to launch a sports-focused ESPN+ app in the spring, and a Disney streaming service in 2019.

Mr Iger said those investments, which add to an existing Disney subscription service in Europe, were "vital" to the firm's future.

"Our goal here is to be a viable player in the direct-to-consumer space, a space that we all know is a very compelling space to be in," he said.

He declined to address reports that the company had held talks with 21st Century Fox about acquiring parts of its business, but he did not rule out an acquisition.

"I don't think there's ever such a thing as having too much quality."

Disney is grappling with a challenge from online video, which has won viewers of traditional television and movies and is driving a shift away from cable television.

In the fourth quarter of Disney's financial year, covering the three months to the end of September, profits dipped 1% to $1.7bn.

Quarterly revenues fell 3% to $12.8bn as the impact of hurricanes, lower advertising revenue and a decline in cable subscriptions weighed on the results.

Revenue in its movie division sank 21%, which Disney said was due to a tough comparison with last year, when a new Star Wars movie lifted results.

Disney's parks and resorts business, which has steadied results in recent quarters, was the only division that reported year-on-year revenue growth in the quarter, rising 6%.

But even that unit was affected by the hurricanes that struck the US earlier this year. Disney said that accounted for a roughly 3% decline in US attendance.

IcetruckNovember 10, 2017
Like story:
tweet
Do not take advantage of the US, Trump warns
Investors to get £66m back after fund collapse