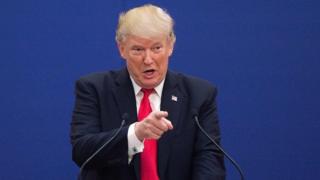 US President Donald Trump is addressing business leaders at the Asia-Pacific Economic Co-operation (Apec) summit, which has begun in Vietnam.

Mr Trump is outlining the future US role in the region when it comes to trade and growth.

His "America First" slogan and withdrawal from a regional deal has been seen as move away from free trade.

President Trump has also vowed to correct a huge trade imbalance with China and Japan.

Apec brings together 21 economies from both sides of the Pacific – the equivalent of about 60% of the world's GDP.

Since taking office, President Trump has pulled the US out of the Trans Pacific Partnership, a major trade deal with 12 Apec member countries, arguing it would hurt US economic interests.

Shaping a new role for the US

For nearly 30 years Apec has been the venue where the United States has led the drive for freer trade and stronger business ties between the world's most dynamic economies.

But President Trump's preoccupation with getting a better deal for America has changed that. He argues that decades of trade growth in the Asia-Pacific region have hurt American companies.

His opening speech at a meeting of business leaders here in Da Nang will be an opportunity for Mr Trump to outline what role he thinks the US should now play in a region which has to a large extent been shaped by past American leadership.

But member states are also exploring ways to pursue improved trade networks without the United States – and China, already a serious rival for military and diplomatic dominance in Asia, is making it clear it is prepared to take over US economic leadership too.

During his state visit to Beijing on Thursday he said:

In response, China said it would further lower entry barriers in the banking, insurance, and finance sectors, and gradually reduce vehicle tariffs.

Deals worth $250bn (£190bn) were also announced, although it was unclear how much of that figure included past agreements or potential future deals. At the same time, US Secretary of State Rex Tillerson told journalists the deals were "pretty small" in terms of tackling the trade imbalance.

Japanese Prime Minister Shinzo Abe will also be making a speech at the Apec summit. Japan had a $69bn (£52.8bn) trade surplus with the US in 2016, according to the US Treasury department.

As one of the first leaders to make a speech on Friday, New Zealand Prime Minister Jacinda Ardern said climate change was "the biggest challenge of our generation".

"It is also the greatest challenge facing the Asia Pacific region," she said, two weeks after having assumed office.

"We have the largest number of climate vulnerable people in the world. We are already seeing the terrible effects of climate change in our region. It is literally lapping at our feet."

After attending the Apec summit, Mr Trump will pay a state visit to the Vietnamese capital Hanoi.

Mr Trump will end his 12-day Asian tour in the Philippines on 13 November.